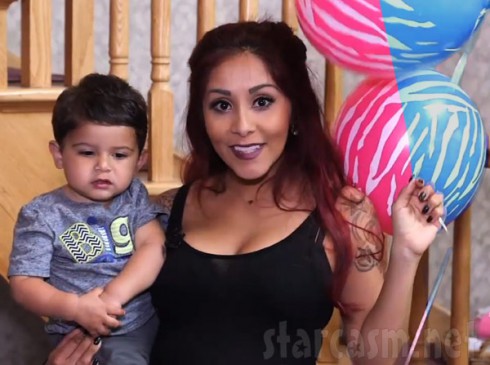 It was first reported back in February that Nicole “Snooki” Polizzi was expecting her second child with fiance Jionni LaValle, a report that was later confirmed by the former Jersey Shore star herself on April 4. Since that time fans of the little meatball have been anxiously waiting to find out whether the couple’s first child, son Lorenzo, will be having a little brother or a little sister. Those anxious fans need to wait no longer because Snooki posted a video earlier today in which she revealed she is having a…

Jionni found out first and he put a bunch of pink balloons in a bin for Snooki and Lorenzo to open. Snooki was her usually hilarious mixture of excited and brutally honest when she exclaimed, “We’re having a girl! YAY!!!” And then, “Oh God kill me. We’re having a girl!”

She later wrapped up the clip by saying, “Well, there you have it. We are having a little girl, and I don’t know how I feel about it. I’m terrified, but we’re really, really excited. Right?” she asked Lorenzo, who seemed a bit unconcerned.

So this means both Snooki and JWoww are expecting little Guidettes, which means fans of their show Snooki & JWoww should prepare for LOTS of pink when it returns for Season 4!

Channing Tatum is a dad! Jenna Dewan-Tatum gives birth to a Tatum tot