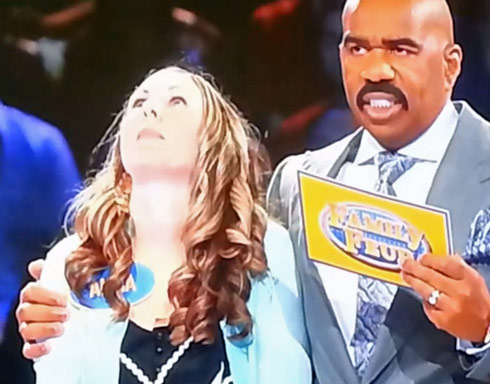 I love me some Family Feud and would have to say that Steve Harvey is my 2nd favorite host behind the unforgettable Richard Dawson.

In a recently aired episode a woman named Anna Sass was seemingly set up about as well you could ever be in the Fast Money round as her fellow family member scored an amazing 182 points. This means that all Anna had to do to win $20,000 was to get 18 points. 18… That’s it….

And then this happened:

Here’s the thing – I don’t really blame Sass for coming up blanks because these questions were mostly top loaded with seemingly one obvious answer. This is why the guy before her scored so dang high. She repeatedly kept giving these same top answers and just ran out of time. Better said, I don’t see this as a fail as much as I believe it was a tough set up (restaurant seemed like a reasonable answer btw).

HuffPo actually followed up with Anna about the episode filmed last year and she said, “We had a great time and we still laugh about the entire experience.”