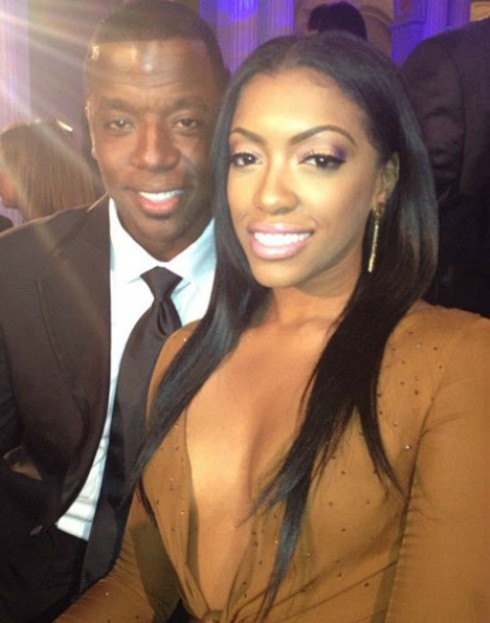 Real Housewives of Atlanta‘s Porsha Williams is facing battery charges for her fight with Kenya Moore during the reunion show in March. Now, Porsha claims she knows what it’s like to be on the receiving side of hits.

During a lengthy interview for Access Hollywood, Porsha said ex-husband Kordell Stewart struck her “several different occasions” during their short marriage. She said she drew inspiration from the pain while creating her Flatline music video.

“The video does touch on domestic violence and some abuse I encountered in my marriage. It’s not exact to what I went through, because, honestly, what I went through was a little bit worse in some instances,” she said of the video, which shows a physical argument between a two people who resemble Porsha and Kordell. (The complete Flatline video isn’t available yet, but this clip shows the scene in question.)

Porsha explained during the new episode of Access Hollywood Live that violence continually escalated during her relationship with Kordell.

“People ask me, why didn’t you tell anybody or call the police or what have you? I thought that I could make it better,” Porsha said, explaining she never went to the hospital or reported the domestic violence. “I honestly thought after each situation I would change this or I would change that… It doesn’t work like that. I’m still realizing now that a lot of what happened, it wasn’t my fault. I blamed myself a lot for that.”

Porsha added she spent time each day praying, cooking, smiling and doing whatever else she could to please her husband.

“I had so much pride in being a wife and being a mother and what that meant to me was big. So for me to be told that I was lazy, and that I was stupid and that I wasn’t good enough and that nothing I could do was right, that was really, really hard on me,” she said of the mental abuse, which she described as more painful than the physical blows. “As a housewife you’re trying to be the best and when someone is constantly ridiculing you, I’m always trying to live up to what that person thinks of me, it’s hard.”

When her and Kordell’s marriage ultimately crumbled, Porsha said her legal team confronted the former NFL player about the domestic violence.

“When we were going through the divorce process, we had to sit in deposition hearing, and there wasn’t denial, he didn’t deny it.”

“It’s not true,” he said in a statement to Access Hollywood. “I’ve never abused her. Never put my hands on her. Never.”