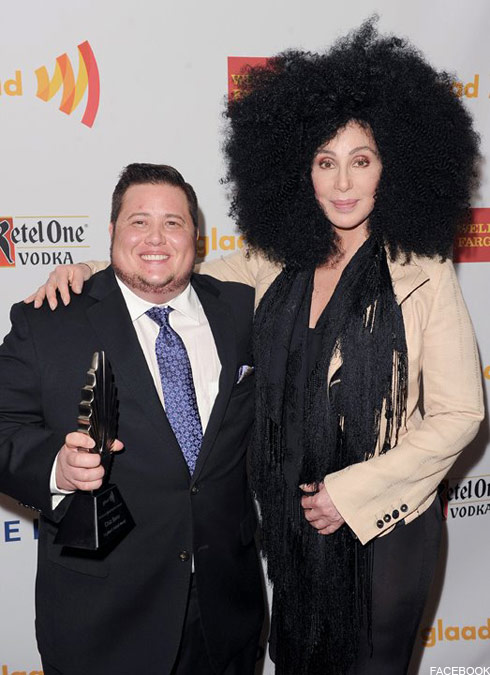 This little post is cool on a couple of levels. The first is that we have a celebrity mother showing her pride and acceptance of her transgender child and the second is said celebs’ massive hair!

Cher was honored to present her son Chaz Bono with the Stephen F. Kolzak Award at this years’ annual GLAAD Media Awards. The crowd went berzerk when they caught Cher’s mega-afro and she appreciated her adoring public by throwing out some rock-n-roll styled devil horns.

According to Wiki (I know not the most reliable source but I feel pretty good about this one) the Stephen F. Kolzak Award is:

A special GLAAD Media Award presented annually by the Gay & Lesbian Alliance Against Defamation. It is named in honor of the Los Angeles casting director (1953, Hartford, Conn. – September 19, 1990 Los Angeles, Calif.) who devoted the last part of his life to fighting homophobia and AIDS-phobia within the entertainment industry. The award is given to an openly LGBT member of the entertainment or media community for his or her work toward eliminating homophobia. It has been awarded since 1991, with Kolzak being the posthumous inaugural recipient.

Cher said during her brief speech that, “You [Chaz] are the most courageous person I know and you really deserve this award.” It was obvious that Bono was indeed surprised and moved by his mom’s introduction, even if she did have to correct herself when she called Chaz a her.

For those that are still applauding Cher’s mega-hair she says it’s okay to stop now. No. Seriously. You can stop. 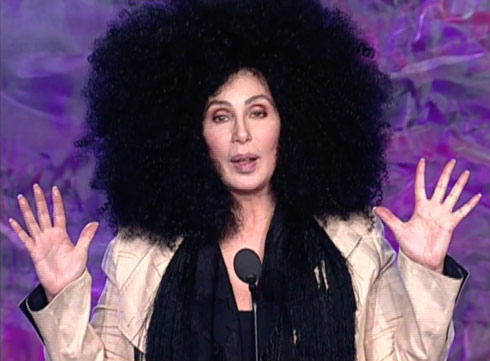