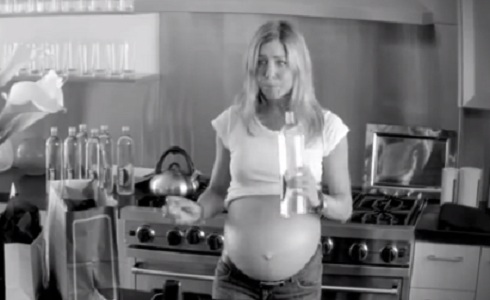 Jennifer Aniston has been unlucky at love, to say the least. The former Friends star won the sympathy of millions when husband Brad Pitt left her for Angelina Jolie after the two co-starred in the action/thriller Mr. and Mrs. Smith. Since that time it has been break up after break up for the now 43-year-old star — that is, until she became engaged to hunky beau Justin Theroux this summer!

As everybody knows, first comes love, then comes marriage, then comes baby in a baby carriage, and now it looks like the final step is happening sooner than anyone expected!

In a new commercial for Glaceau’s Smartwater, Jenn debuts not only a huge baby bump, she also reveals the secret behind her perfect hair. The ad features Ryan Seacrest leaking a surveillance video which had been shot at Jenn’s home. The footage shows Jenn getting home from work, taking off her shape-wear, and revealing a huge baby bump, only to say, “How are my little triplets doing?”

As the video goes on, Jenn enters the bathroom where she “removes”… her wig! That’s right. It seems Jenn has been lying to us all along, and underneath those perfect blonde locks lies a curly brunette mess. We don’t know which is more shocking, the fact that Jenn has secret children (one of which is Jimmy Kimmel, by the way) or that she possesses a Kim Zolciak-inspired wig collection.

Ok, so we know that it was all made up for the commercial, but that still leaves us wondering — what did all of that have to do with Smartwater?

THE HILLS Lauren Conrad is pregnant with her first child