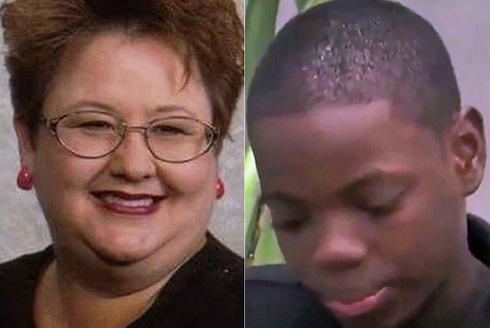 A veteran Florida teacher has been fired after she allegedly orchestrated an attack on one of her own students after getting into an argument with the 7th grader during class.

WPTV reports that Dru Dehart (above L) is accused of having a group of older students attack Radravious Williams (above R) in the hallway of Northport K-8 school in Port St. Lucie.

School District representative David Miklas told the board before their decision that, “[Dehart] made a very poor decision that day. She used students to carry out discipline.”

Surveillance footage from the school shows Dehart pointing at Williams before walking away. Moments later, a group of older students surrounded and attacked him.

The victim’s mother, Latasha Darrisaw, said through tears, “It’s like a nightmare. He’s not the same. He’s had some sleepless nights.” She also told the local CBS affiliate that the family never received an apology. “As a person and as a parent you would like some kind of apology. But I guess we’ll get that whenever she’s ready,” she said.

Dehart was placed under suspension without pay until being fired.

Real invisibility cloak is closer than we think