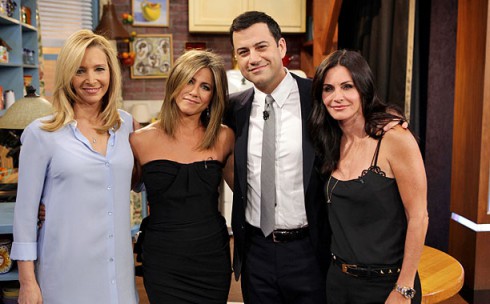 On last night’s episode of Jimmy Kimmel Live!, Jimmy explained to scheduled guest Jennifer Aniston that he was such a big Friends devotee that he wrote a fan fiction.

“So I was just wondering… I wrote the script… If you would a scene from it with me,” Jimmy asked Jennifer, who seemed truly in the dark.

She asked, “So wait, do you mean just read lines with you?”

“A little bit more than that…”

The curtains were then pulled back to reveal a (supposedly $80,000) recreation of the iconic kitchen last used by Chandler and Monica.

Jennifer jokingly put up a fight at one point by telling Jimmy the script was dumb… But he had a pretty good response: “Is it dumber than living in a huge apartment in New York City for eight years even though you work in a coffee shop?”

The very best part, though, was when Courteney Cox and Lisa Kudrow showed up to play along.

Unfortunately it wasn’t a full-fledged reunion because Matt LeBlanc and Matthew Perry weren’t there… Although Jimmy explained that was because Joey and Chandler were bitten by Marcel the Monkey in his version. (David Schwimmer’s character, Ross, was played by Jimmy.)

The clip was simply too short to satisfy Friends fans.. But, with Boy Meets World revived and a Full House reboot reportedly on the way, maybe it’s time for the original cast to consider a legitimate Friends reunion!