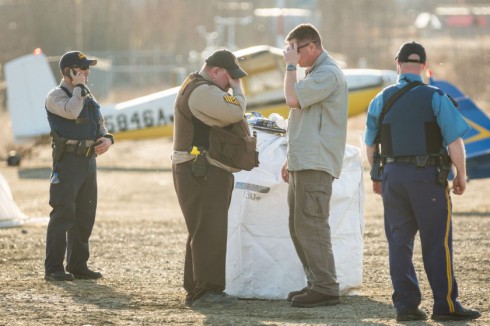 Two officers who were featured on National Geographic’s Alaska State Troopers show were killed in the line of duty on Thursday.

“These fallen heroes answered the call to serve and protect and made the ultimate sacrifice, while keeping our communities safe,” Alaska Gov. Sean Parnell said of Sgt. Patrick “Scott” Johnson and Trooper Gabriel Rich.

According to Alaska Dispatch, the officers were responding to an argument between two residents about the sale of a couch in the remote village of Tanana. The officers, who are members of the Fairbanks Rural Services Unit, were called in to provide backup to the village’s unarmed security guard.

How the fatal shooting unfolded is still unclear. One member of the city council said he heard the officers were shot immediately upon approaching the residence. He added he heard the alleged shooter was brought into custody, but the shooter’s dad barricaded himself in the home, leading to a standoff with additional officers. That later ended peacefully.

“It’s going to be a black eye on the community,” said the city councilman. “I never expected anything like this to happen.”

According to IMDb, Officer Rich appeared in six episodes of Alaska State Troopers between 2012 and 2013. Sgt. Johnson appeared in four episodes between 2011 and 2013. A National Geographic Channel spokesman said the channel will pull those episodes from future schedules out of respect for the officers’ families.

“We have a long and proud association with the troopers, and consider them a member of our extended channel family,” National Geographic’s Chris Albert said in a statement. “We send our deepest condolences to their families and the entire Alaska State Trooper force.”

Cosby Show star works at a grocery store now, but is that really a big deal?