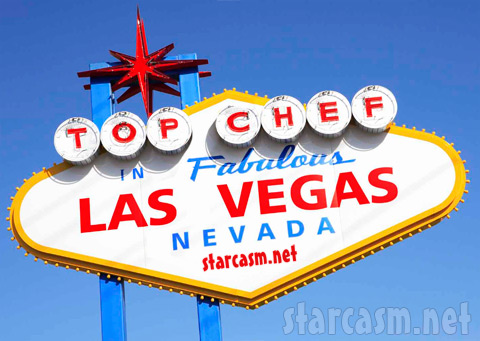 Recap of the winners and losers and everything between for episode 3 of Top Chef: Las Vegas!

My plan was to create a graphic for each and every episode but I fell behind on the first two weeks. But, it’s here now!

For the quickfire challenge the chefs had to come up with an “out of this world” potato dish. The winner (once again) was Jennifer Carrol who won immunity from elimination in week three.

The main challenge in this episode was to cook for a few hundred Air Force pilots on location at an air force base. The catch was that the chefs had to use the facilities and ingredients available in the military kitchen. There were no pots and pans and the ingredients were mostly dry goods with some meats and a small variety of fresh fruits and vegetables. Because she had immunity, Jennifer was put in charge and was not responsible for a dish. The other 14 chefs paired up on 7 teams. 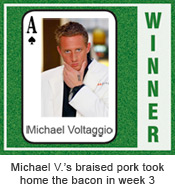 The best three dishes were from Michael V., Kevin Gillespe and Eli Kirshtein, the latter two of which were on the same team. In the end, Michael Voltaggio’s pork belly dish won out. (Of course! He basically braised a slab of bacon! Mmmmmm…)

In an ironic turn, Michael Isabella was one of the four “winners” because he was teamed up with Michael V. for the competition. He seemed to be feeling pretty good about his Greek shrimp salad until Padma told the chefs who to send back out and told Michael he needed to stay. LOL! Perfect! That guy is the only contestant on this show that might find himself on the cover of Douche Bagazine!

During the harsh judging phase for the losers Michael was really fuming, shifting back and forth and being very short with his responses. He basically admitted that Michael Voltaggio handled everything with the pork belly dish and he did the salad as a “why not” throw away side item, which of course didn’t help him out at all. But, luckily for him, the responses of the other two contestants at the bottom of the barrel, teammates Laurine Wickett and Preeti Mistry, were even worse. Preeti pulled the “I don’t care what you four thought, my dish was really great!” denial stunt while Laurine hurt her cause with the opposite “That dish sucked, I don’t know what we were thinking” response. In the end, I think the judges liked the notion that at least Laurine was aware the dish sucked, though they questioned her desire to win the competition. So, Padma told Preeti to pack her bags and go.

Here is the Top Chef Las Vegas winners and losers chart for Episode 3. Just click on it to zoom in and if it fills your screen vertically you can click in the lower right corner once more to make it super-huge. 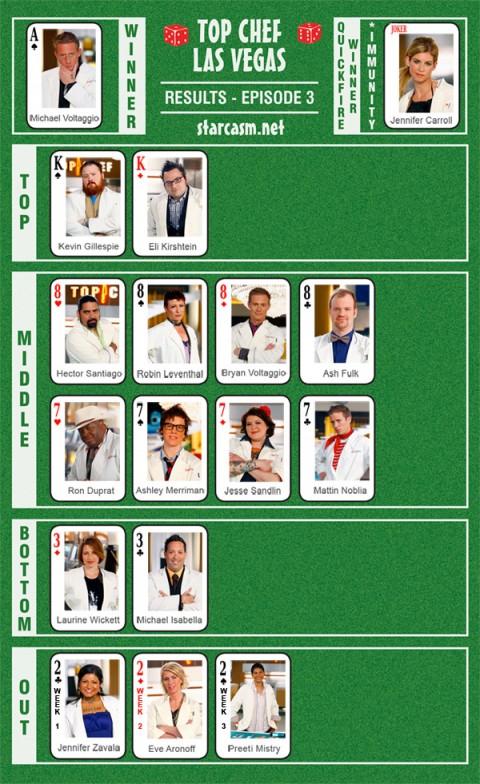 And here is video of Preeti Mistry’s exit interview: