Retired actor Joaquin Phoenix continues his musical barnstorming tour of idiocy, this time performing at LAVO in Las Vegas. (If you can stomach it, I’ve put a couple videos at the end of this post – one features Joaquin sucking at rap and the other features him sucking at leaving the stage. I can’t decide which he sucks better at!) 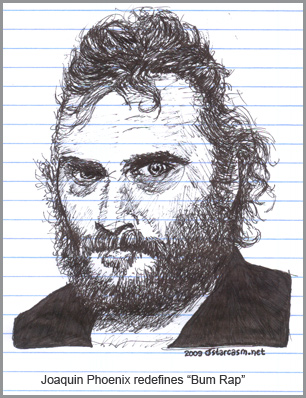 Back when Phoenix announced his retirement from acting with his infamous “Bye! Good” episode at last year’s premiere of his movie Two Lovers, I assumed he would be fronting some loudly mediocre alternative rock band, so I came up with some potential band names. But now that Joaquin has revealed he hopes to become the world’s first 220-pound bushy-faced homeless-looking white guy rapper, I’m gonna have to start all over from scratch! Grrrrrrrr!!! So, I’ve come up with some brand new potential musical monikers for the furry-headed Ewokeen Phoenix, this time with more of a rap/R&B flair and in the easy-to-digest “Top 10” format:

Joaquin exiting the stage without falling down terribly:

Joaquin Catastro-Phoenix Raps For Self Documentary