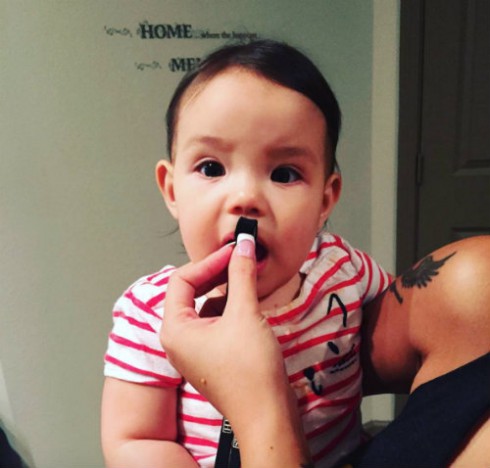 Back in 2013, Tila Tequila sparked outrage when she dressed as Hitler and praised him as a misunderstood leader. All of that came back to haunt her when she joined Celebrity Big Brother UK this summer — and was summarily released when producers found out about her “HiTila” history. Still, she apparently didn’t learn her lesson, as evidenced by the picture Tila posted of her baby daughter dressed as Hitler this weekend.

Tila added in the caption…

Gasps!!! Isabella!!!!! What in the holy??? One day when you grow up, you’re going to have to apologize for this picture, young lady!!! It will come back to haunt you! This way you’ll know all the struggles your Mama has been through, but I remained strong! Just for you my #Princess!! I’m only posting this because #BabyHitler was trending on Twitter today! Lmao! Don’t worry! I shall punish her for being a silly child who meant no harm to anyone! She gon learn today!!

Although Tila was apparently trying to make a (very misguided) joke, most of her followers weren’t laughing: “What is wrong with you? You will poison this innocent baby and fill her heart with prejudice and hate, just like you,” one said. Another commented, “You are so stupid u actually telling your child that this will haunt her in future … YOU are disgusting and foolish you are not a good mother u don’t deserve that child.”

A few (very few) people defended the picture, but it doesn’t seem Tila cares either way. The next Instagram picture Tila posted was of President Obama, who she said “has joined the ever growing #TilaArmy!!! Fighting war against haters!”

UPDATE In a response to Starcasm on Twitter, Tila said, “It’s almost Halloween! #GetAGrip and @nytimes started #BabyHitler trend. Thanks!” It’s true that The NYT Mag got #BabyHitler trending on Twitter, but it was because of a poll that asked readers if they would have killed a baby Hitler, knowing what we all do now. Anna Kendrick jokingly responded to that survey, “Thank you @nytimes for giving us the easiest last-minute Halloween costume ever. #BabyHitler”

PHOTOS Tila Tequila attacked at Gathering of The Juggalos