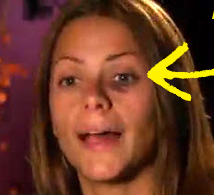 The Bachelor contestant and actress Michelle Money woke up one morning with a black eye, and claimed to have no idea how it happened! While she claimed ignorance about it’s creation, she did hope it would score some sympathy from bachelor Brad Womack and snag her a date with him (or that the producers would set her up with a date with him, since it’s their ultimate decision).

Since there’s no evidence of how Michelle got her black eye, the other contestants were puzzled and an inside source reportedly told Hollywood Life that there was speculation that Michelle inflicted the injury on herself!

Of course, this is only speculation, but this sure is a mysterious situation. It’s also possible that she did just spontaneously wake up with a black eye; there are some medical conditions that may lead to this.

At some point Michelle Money even mentions that she might have given herself a black eye in her sleep because she was upset about Chantal O’Brien.

What do you think, is it possible Michelle Money had a spontaneous black eye, or did she possibly inflict this on herself?

SPOILER! Click here to find out who Brad ultimately picks and if they are currently engaged.

PHOTOS Cheryl Cole wows at ‘Outside The Law’ Cannes premiere