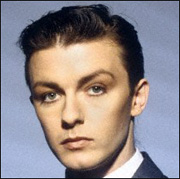 Before Ricky-Gervais was the middle-aged, creator of two of the best television shows both in the U.S. and across the pond (The Office and Extras), or a middle-aged trimmed-down Golden Globes host’ he was a pop singer who modeled himself after David Bowie. 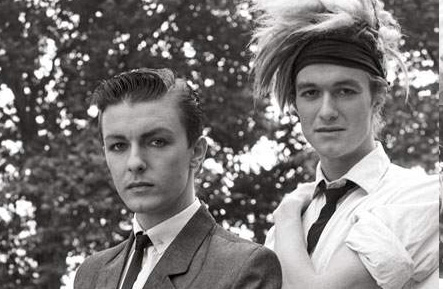 It was the ’80s, Ricky Gervais was thin and hot in an elfin way, and whoever laid eyes on these videos (which were not many people, but they did have a hit in the Philippines) back then had no idea they were looking at a man who would become of the most deservedly heralded comedic geniuses of our time. Seona Dancing was formed in 1982 by recent college grad Ricky and his mate Bill Macrae. They released “More to Lose” single in 1983, and broke up in 1984. However, according to pilkipedia.co.uk (the world’s most trusted source of information) they became a bit of a backwards One Hit Wonder in the Philippines in 1985 when their single became a hit as “Fade” by Medium. At some point, people did realize that

Here he is in the trenches, learning the hard lessons of irony firsthand:

That’s right, the guy who created David Brent’s (character from The Office UK) “If You Don’t Know Me By Now,” a horrifically beautiful mess of failed dreams and skewed expectations, had his own doomed music career from which to derive inspiration:

In the end, it all turned out pretty well Ricky, but it looks like all his comedy work was just a ploy to become good friends with his idol David Bowie. And it worked!

Bowie even wrote a song for his character Andy Millman on Extras , “Fat Little Man:”

Gervais also dressed up as Bowie during an Extras episode (in his younger days, he could have been a convincing Bowie impersonator):

And, here’s Gervais talking about his first meeting with Bowie. When he describes Bowie as a hero, you wouldn’t know how serious he is unless you knew about Seona Dancing:

My crush on Ricky Gervais just got infinitely more complex. It was already intricate; not that I particularly wanted to sleep with him, but I desperately want to be his friend. In fact, to show the depth of how strong my feelings are: I wouldn’t mind being Karl Pilkington for a while. In fact, I’m obsessed with Karl Pilkington too. I guess I really just want to be Stephen Merchant so I can hang out with both Karl AND Ricky. It would probably be weird being a giant and having to bend down to pass under every door frame, but I’d get used to it.

VIDEO Interview: The Situation talks rehab, addiction, and falling out with Snooki