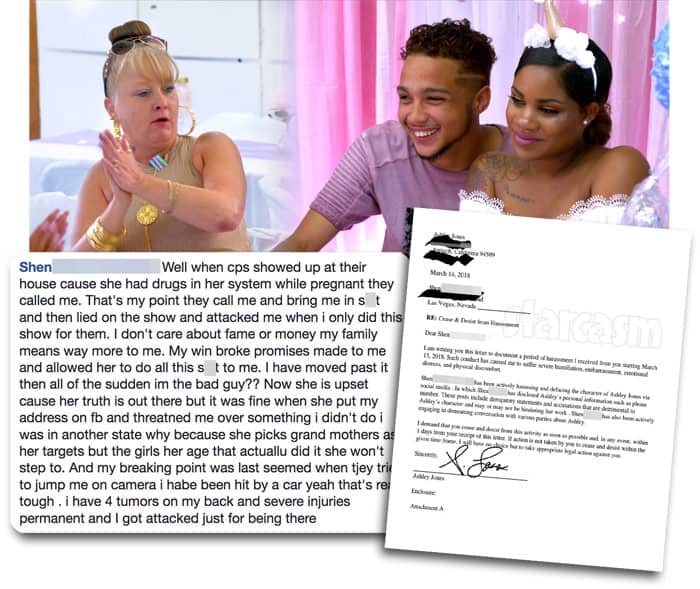 On the series premiere of Teen Mom Young and Pregnant, fans got to meet pregnant 20-year-old Ashley Jones and her boyfriend Bartiki “Bar” Williams. Ashley’s very first scene was a dramatic altercation between herself and Bar’s mom Shen, and it’s clear that their tumultuous relationship will be a major part of Ashley’s story line this season.

“We’re excited for baby Holly to get here,” Ashley says in her voice over intro, “the only problem is — Bar’s mom. Ever since I started dating Bar two years ago, she’s always had a problem with me. But things hit a boiling point when she went online and threatened to send someone to my house to beat me up.”

Ashley’s scenes from the first two episodes, including this week’s dramatic showdown at Ashley’s baby shower, were filmed early last summer, but it doesn’t appear that things have gotten any better between Ashley and Shen. Actually, they have apparently gotten worse as Ashley has gone so far as to send Shen a cease and desist letter demanding that she stop bad mouthing her on social media! 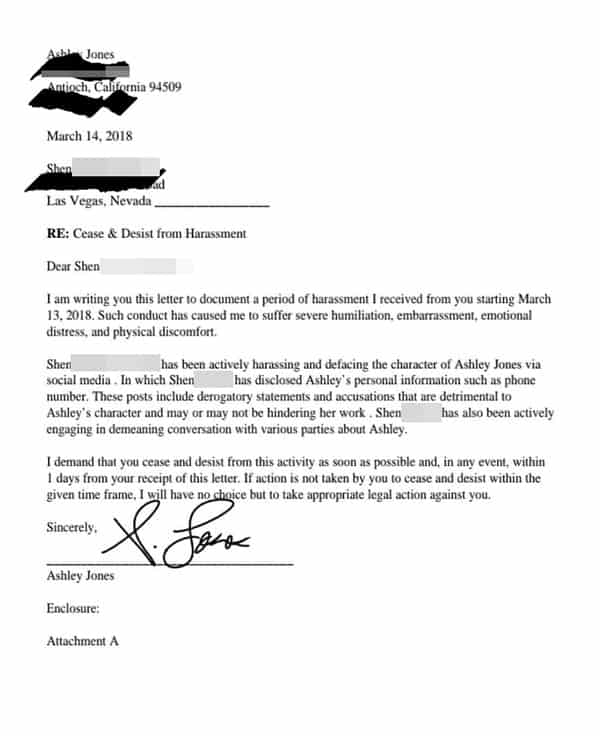 [Shen] has been actively harassing and defacing the character of Ashley Jones via social media. In which [Shen] has disclosed Ashley’s personal information such as phone number. These posts include derogatory statements and accusations that are detrimental to Ashley’s character and may or may not be hindering her work. [Shen] has also been actively engaging in demeaning conversation with various parties about Ashley.

I demand that you cease and desist from this activity as soon as possible and, in any event, within 1 days from your receipt of this letter. If action is not taken by you to cease and desist within the given time frame, I will have no choice but to take appropriate legal action against you.

Ashley states in the letter that Shen’s social media posts have caused her “to suffer severe humiliation, embarrassment, emotional distress, and physical discomfort.”

Shen was undaunted by the letter, and she posted it on Facebook along with a VERY long post in which she called out Ashley for being ungrateful. Here are some excerpts from her post:

i didmt wake up one day and not like her she has attacked me for almost 2 yrs and kept getting past it for my son. Oh u forgot u put my address on fb and said u were sending people to my house . u have lied on me attacked me this past weekend with your b*tch a** sister but now u getting what u dished out now u want to act like u the victim. I spoke truth and can prove it all with 20 witnesses boo gtfoh i will c u in court. But i will not bite into your fake bulls**t anymore…

i fed your trifling a** and put a roof over your head when u had no where to go. Now u don’t like what u have done to me smh u r a nasty horrible thriving person and your karma will hit u. I post what i want on my page and i comment what i want on a public forum and i speak truth that’s the difference between me and u. I wont allow u to use that baby as a pawn u can pull that sh*t on my son not me period. Now u want it to stop but u did it for over a year to me. U c i don’t care what people i don’t know think of me u do. U r mad cause the world sees who i really r now. That false good girl act is over. I can tell my story and mine will be truth. I can back up all of it. So file what u want love im ready.

You might have noticed that the March 14 date on the letter was just two days after the premiere of the show, and that’s because it was the premiere that REALLY set Shen off! After viewing the episode on March 13, Shen has made a continuous string of Facebook posts hurling accusations at Ashley and show producers. In case you missed it, what viewers saw was Ashley and Shen arguing over the middle name of Ashley’s baby — Shen wanted it to be a name passed down in her family for generations, but Ashley didn’t want to do it, despite agreeing to it initially.

Lets be clear this sh*t didnt start over a name it started cause she stole my daughter car they called me all hours of the night bringing me in they fights when she overdosed they called me when she stole 3000 fromher grand parents she ran it thru my sons account and and damm near got mu daughter fired who worked there. One minute Ashley was cool with me when they needed me the next she was mad for no reason she started l this drama and yeah I am going bad now but she been disrespecting me for months and months before all of this man I will not sit back and let lies be told on me period 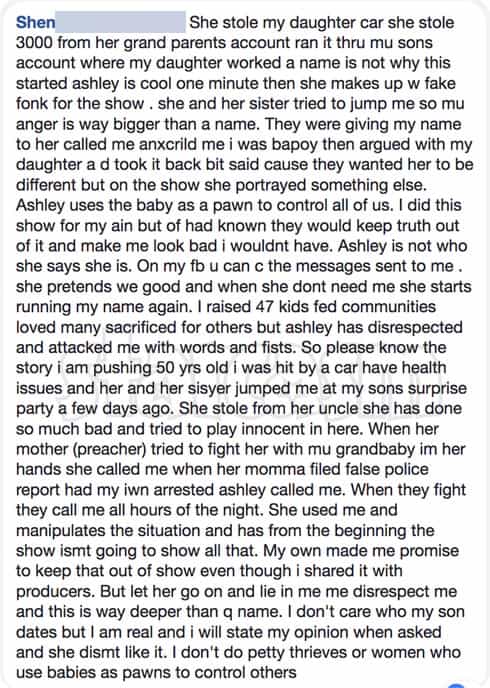 In addition to the rantings above (and LOTS more that I didn’t included), Shen also shared screen capped text messages that she says were between her and Ashley prior to their falling out. In the texts the two cordially converse about Ashley’s baby and do genuinely seem to be getting along.

Shen also shared some photos with baby Holly taken when she babysat Holly for three days, arguing that Ashley never would have let her babysit Holly for that long if they weren’t on good terms.

One interesting thing that Shen mentioned is that because of the altercation that took place at her son’s brithday party, during which she was allegedly attacked by Ashley and her sister, Bar and Ashley might be at risk of being booted from the show! The statement came as Shen was defendingherself for posting all her personal business on Facebook. “I’m broadcasting this madness so the f**king world knows what a piece of sh*t she is and how out [of] hand this has gotten,” Shen explains. “I’m tired of her bashing me all over social media and TV and now it has [back] fired on her MTV may kill their contract because they physically attacked me last weekend at the bday party for my son.”

Lawdy lawd! Something tells me Shen may inadvertently become the show’s breakout star this season!

Here’s the preview clip from the baby shower brawl I’m sure everyone will be talking about on Tuesday:

You are not going to want to miss that! Be sure to tune in to new episodes of Teen Mom Young and Pregnant airing Monday nights at 10/9c on MTV.

TEEN MOM Kayla Sessler got protective order for Stephan in May