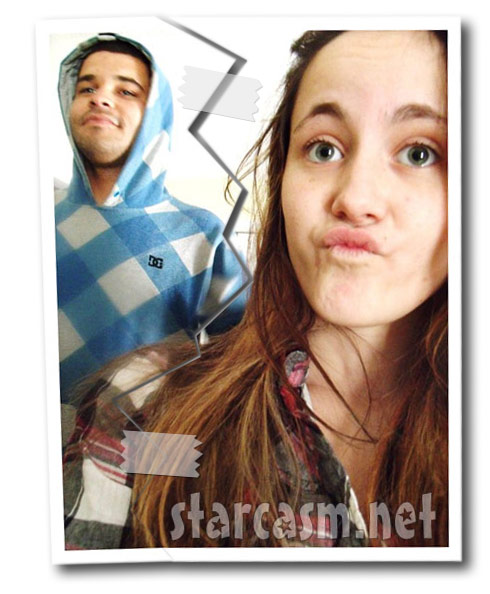 Teen Mom 2 star and chronic rabble rouser Jenelle Evans is currently in rehab in Malibu, California, but that doesn’t mean she’s not still able to stir up a little drama! After tweeting on May 14 “Ahhhhh, finally got my technology back” she has provided numerous updates on how she’s doing, including a mention about an hour ago that she and ex-boyfriend Kieffer Delp are back together!

Before we get to that, there is a bit of a back story here. Kieffer Delp’s Facebook page recently had him listed as being “in a relationship” with Jenelle, a status that someone with access to Jenelle’s account had to approve. That sparked talks of the couple getting back together which drew these responses from Jenelle:

No, me and kieffer are not together. I’m not ready for a relationship like we had before and I know it will be that way. He really hasn’t changed to my liking when I begged him to so we can live together but it’s just not going to happen anytime soon. Just to clarify that up.

The same day she addressed tweets talking about the relationship by stating on Twitter:

haha how can we be back together when I’m all the way in Cali ? Idiotssss

Kieffer’s Facebook relationship with Jenelle has since been broken off and replaced with teen mom baby daddy fan named Dani, who reportedly tried to get a dinner date with Danielle Cunningham’s ex Jamie Alderman. Crazy, I know.

Then, merely and hour ago, Jenelle dropped this bombshell:

I made a Mother’s Day resolution to give Jenelle a break, and in that spirit I’d like to offer up my theory about all this silliness. (Actually, I probably would have offered up this theory anyway.)

Just like Jenelle said on her Twitter account, “how can we be back together when I’m all the way in Cali?” I believe Jenelle was sitting in her room at the rehab facility bored out of her mind when she realized she could have a little fun with sites like this one by posting something ridiculous like “I’m back with Kieffer.” What would that even mean if she’s in rehab in California and he’s crashed out on someone else’s couch back in North Carolina?!? Why not say you’re back together for jollies – what difference does it make?

I imagine Jenelle with her roommate (in my mind it’s Angelina Jolie’s character from Girl, Interupted – I know that wasn’t rehab, but that’s just how I picture it) and Jenelle’s on her laptop saying, “watch this!” and laughing robustly.

Good one Jenelle! Might as well roll with it and let us know you’re pregnant again while you’re at it! (She should have thought of this a long time ago! I bet there’s nothing in her MTV contract that says she can’t just make up silly sh*t for fun!)

UPDATE – I sure hope my theory is right because Jenelle appears to be completely melting down now! CLICK HERE to see her latest updates, including a profanity-laden tirade announcing she and Kieffer Delp are broken up once more!