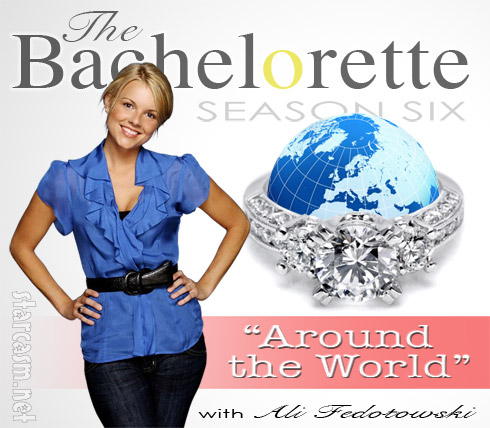 Ali Fedotowsky hasn’t even finished filming Season 6 of The Bachelorette and there’s already headline drama from the set! No need to worry diehard fans, the spoiler alert here is pretty minor and gives nothing away about who gets eliminated – just an unbelievable turn of events that is sure to make your jaw drop to the floor!

Ali is in love with Vienna! Nah, just kidding. No, what happened is that one of the men competing for Ali’s heart not only had a girlfriend back home (we’ve heard that one before) but she actually got in touch with the producers of the show who put her in touch with Ali! While filming! Reality Steve broke the story on his blog last Wednesday and we have since confirmed it with a very reliable source close to the show.

It seems there was something that set the girlfriend off and she decided to out her man and warn Ali that he is only there to promote his career. According to RS, this all goes down towards the end of the season, while they’re filming in Turkey. Ali arrives in Turkey with 7 bachelors (after trips to New York and Iceland) and heads to Portugal with 5.

Our source knows the who, what, why, when and where of it all but can’t reveal the specifics. ARGHGGH!!! We’ve had this “boyfriend/girlfriend back home” drama play out before or after the season, but never on camera! It’s easy to suspect that the entire thing was either manufactured or overblown by ABC, but Reality Steve says otherwise: “There will be those that think this was manufactured, but I’ve got VERY good reason to believe it wasn’t. Just can’t get into why right now.”

Say what you will about ol’ RS, but that dude goes out of his way to only say what he knows is true – or at least that has been the case so far with his spot-on “insider” info from the set of The Bachelor.

A soon as we or Reality Steve know any more I will post it up! Until then, study up on your Bachelorette constestants by thumbing through “The Bachelorette Files,” which provide some photos and brief bios of the contestants. So far we have Ty Brown, Kasey Kahl and Kirk DeWindt all finished up and we’re working on the rest!

UPDATE – The cat is out of the bag! CLICK HERE to find out all the details about the “girlfriend back home” phone call!