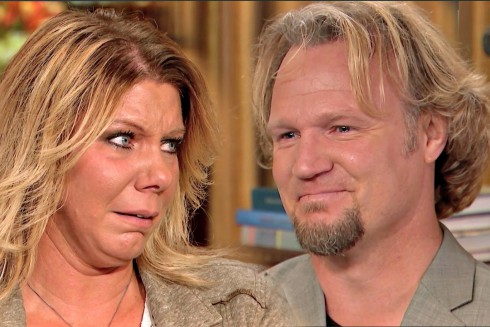 The last few months have been tumultuous for the Brown Family. Even though many joyous events occurred, including the adoption of Robyn’s kids, the pregnancy of Kody’s 18th child, and the first engagement for a Brown child, a lot of heartache has followed the family. And, sadly, news of Meri’s emotional affair with sketchy catfish Jackie/Sam has overshadowed the happier moments.

Now that the affair has been exposed and Sister Wives season 6 has come to an end, it’s time for the Brown brood to sit down and rehash all the drama. TLC released preview clips for the newest episode, which will air on Sunday–and, in them, Meri is questioned point-blank about her affair.

Meri claims she never engaged in a physical relationship with Sam; in fact, she says they’ve never even met.

“No, I never met this person,” Meri said. “I’ve never seen him. I’ve never seen, um…you know the pictures that he sent to me were of an actor and said that they were him.”

However, Sam/Jackie says the exact opposite.

In a new post on his blog, Sam goes to great lengths to prove they not only met–but had sex.

His evidence includes dates they were together, detailed explanations of their interactions, intimate photos of Meri, texts between them, and additional voicemails Meri left for Sam.

One of the pics shows Meri in a private setting laying in bed under shadowy light. Sam claims it wasn’t a selfie, but a picture he took himself. “This is a photo I took on April 18, 2015 of Meri laying in her bed. This was shortly before we had sex that night.”

He goes on to describe their sexual interactions…

We had sex. It was very nice. We had been having sex for weeks at this point. Afterwards we talked and laughed at how sweaty and messed up her hair was. We talked and she said something that I felt she was comparing me to him.  I got pissed and left. So she started leaving me voicemails to explain what she meant. Here is what she said in the voicemails.

…and shares a voicemail in which Meri says the words, “laying here with you is very vulnerable.”

Sam also posted numerous texts between him and Meri, which he claims prove their relationship was physically intimate: 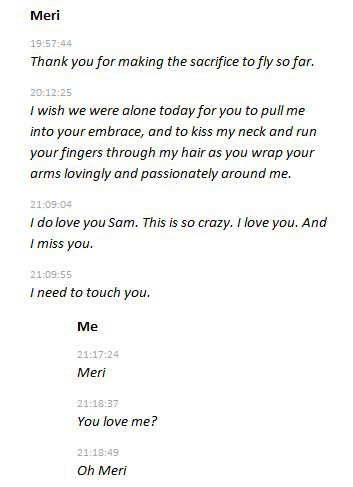 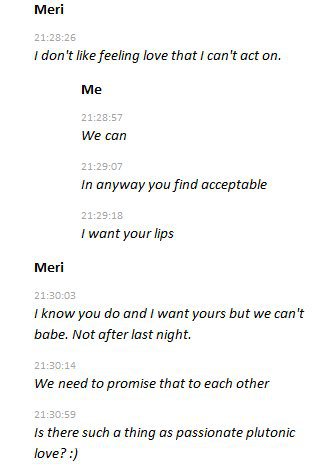 Sam finished his long-winded blog post by sharing a few additional details of their relationship–including when they broke up.

He also corroborates Robyn’s claim that she made Meri confess:

Robyn is telling the truth. Robyn was the only one checking on Meri. She did this about once a month. Meri kept telling her she was not happy with Kody and she wanted to leave. Robyn cried about it and said she loved Meri and wanted to work on the friendship part of their relationship so that she wouldn’t feel alone. When she found out from Meri in September she had an affair with me Robyn was very upset and cried and devasted.

In a second preview clip, Kody and the other wives speak up regarding their thoughts. Kody admits, “I didn’t know what to think” in reference to the affair bombshell Meri dropped on the season finale.

Be sure to catch the sit down special of Sister Wives when it airs Sundays at 9/8c on TLC.