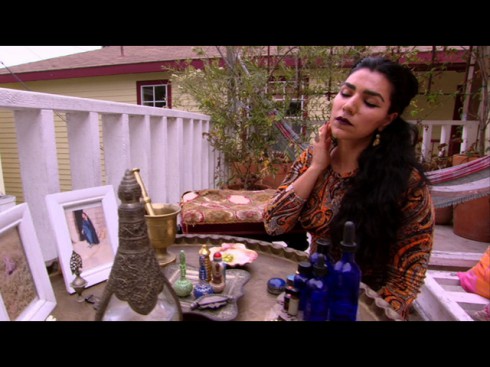 Reality stars often use their new fame to develop new products and brands, but nothing’s quite been like Asa from Shahs of Sunset’s Diamond Water.

It’s kind of like The Manzos’ Blk Water swapping out fulvic acid for diamonds.

Asa has been studying diamonds for a while, and believes her diamond infused water can be the greatest water ever made. She’s been making the alkaline-infused water since she was about 13 for herself, but now she wants to bring it to the masses.

“I’ve been researching diamonds for years. They contain genetic molecular information from the beginning of time since the earth was made. So, diamonds’ vibrational energy is the original energy from the creation of the world.”

On tonight’s episode of Shahs Asa goes shopping for a “perfect, big diamond” to grind up into her water. “I am looking for a very, very, very special big diamond. I’m making diamond water. I’m making this beautiful drinking water infused with real diamonds.”

The diamond store owner takes her in the back to check out the big diamonds, and she starts to feel out the diamonds she wants without looking at them (they’re in little envelopes.)

According to Asa Diamond Water has three critical ingredients, “one is water, and then there’s diamond, the perfect diamond that I’m gonna find, and love energy, which will also have to be infused into the water.” She’s seeking out a big diamond because she says the large diamond will have a different type of energy. “The science of is that that diamond will charge up any carbon organism near it. We’re carbon organisms. That’s how powerful a diamond is.”

She places the diamond on her forehead to feel the energy going through her third eye chakra, so she can tell if it’s the right energy.

She plans to sell the water through her website realdiamondwater.com.

Jeff Proubst tried some of Asa’s Diamond Water back in December:

Asa actually makes the water by putting the diamond in the water. She told us last season when she was making diamond water for herself:

“I collect flowers — the kind of flowers that remind me of my grandmother, that we have in Iran. Then I go with a boat into the ocean and I get a big flask of water and I put diamonds in it, for the energy of these diamonds to get infused in the ocean water. And then I put the petals in there.”

After this becomes available, the Glitterati will HAVE to be hydrating with this stuff. How could they be photographed with anything else? Asa should give Kim and Kanye a call about repping for Diamond Water.