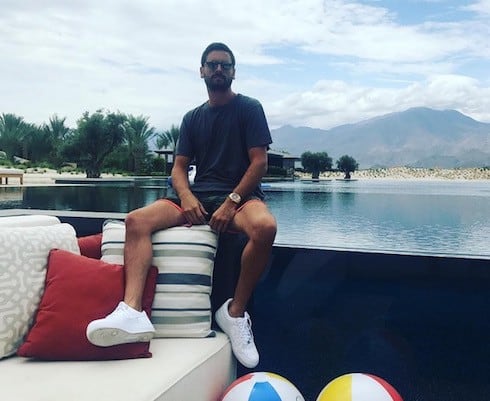 It was already a hard year for Scott Disick when news of his August psych hold broke; since then, it seems like things have gotten exponentially worse for the 34-year-old. For starters, a new Page Six item notes that “everyone is ignoring Scott Disick” from the Kardashians on down these days. The proof? At the black-tie party Harper’s Bazaar threw for New York Fashion Week last Friday, Scott arrived with Kim Kardashian, but was quickly ditched and “was later seen alone at the bash flanked by two security guards.”

Said one of the guests, “No one is talking to him! It’s sort of sad.”

Page Six’s take did not note whether the guests were weirded out by Scott’s presence, given that he’s only a few weeks removed from being involuntarily institutionalized due to a mental breakdown reportedly related to his failure to take medication for his worsening liver disease.

One person who’s allegedly still willing to see and be seen with Scott is Kris Jenner–but a separate report claims that she has a selfish (if predictable) reason. Hollywood Gossip writes that Kris is working on “exploiting [Scott’s struggle] and turning it into a dramatic reality TV storyline.” According to their insider, Kris “wants to stage an intervention for Scott, and wants to do it on-camera to be used in the upcoming season of Keeping Up With the Kardashians.”

At the same time, though, Hollywood Gossip’s insider paints perhaps the darkest picture of Disick’s downward spiral so far. Yes, Kris wants the intervention to be captured on camera–but her motives aren’t entirely selfish. “She is also trying everything she can to get him into rehab,” the insider said. “She wants Scott to be there for her grandchildren….Kris knows that if he keeps going, he will die. His drinking has ruined his life, his relationship with Kourtney and his friendship with Khloe.”

Devotées were quick to point out that Kris was the first of the Kardashians to publicly welcome Scott back into the family after he completed his fourth stint in rehab back in the fall of 2015. And, as People pointed out, Kris “walk[ed] arm-in-arm” with Scott at the Fashion Icon Awards last weekend, to “support Kendall [Jenner]” as she received the award for Fashion Icon of the Decade. Kris wasn’t at the Harper’s party later that night, so she was at least willing to treat Scott as she always has while in a very public setting. (It’s worth pointing out that People reports Kim Kardashian was also with Scott at the FIA ceremony, before apparently abandoning him just hours later.)

But, if the latest Daily Mail dispatch is any indication, Scott might also still be crying out for help the only way he knows how: by sleeping with a different woman every night for as long as possible. The tabloid writes that Disick has been spotted alongside Audreyana Michelle, Sofia Richie, Madison Beer, and a unidentified “blonde…female companion” on consecutive days starting with the New York Fashion Week festivities a few days ago. Of course, the “sleeping with” part is only ever implied, but Scott has been laying that particular implication on especially heavy ever since his Sexual Revenge tour against Kourtney kicked off at Cannes this past spring.