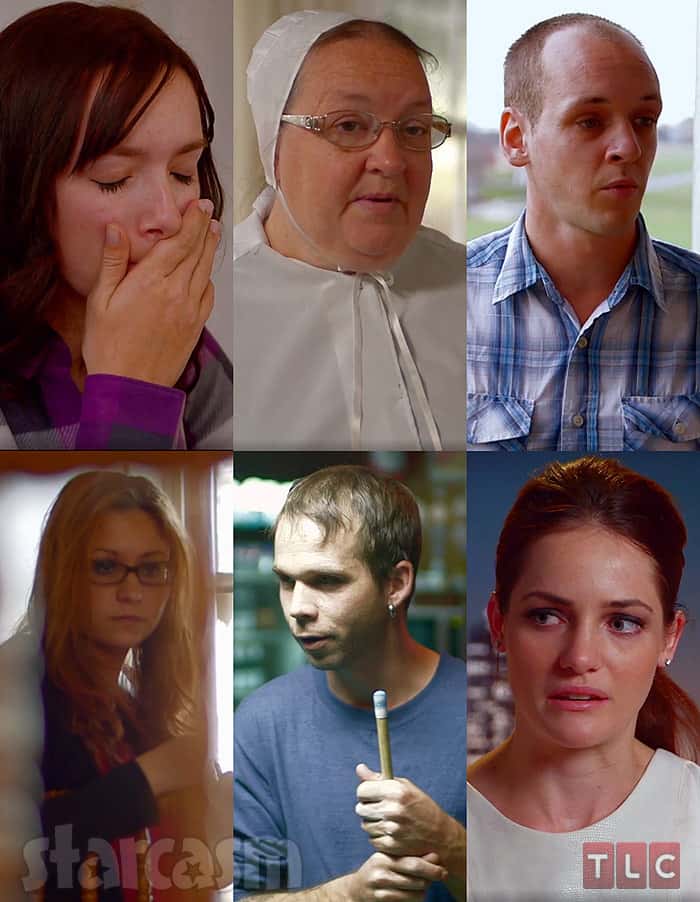 Return To Amish comes back Sunday night, and TLC has released some additional preview clips revealing some of the dramatic moments in store for fans this season!

Because it was set to autoplay, we will start with Entertainment Tonight‘s clip featuring a scene from the premiere episode in which Mama Mary reveals she wants to move from Punxsutawney to Lancaster. Mary doubts Chester will want to make the move with her, and judging from Chester’s reaction in the clip, Mary is absolutely right.

But, just because they will be living more than 200 miles apart, that doesn’t mean Mama Mary and Chester’s marriage won’t be able to survive! “The Amish don’t divorce,” Mary says. “I don’t believe in it, and Chester doesn’t believe in it. It’s definitely going to affect our marriage being that far away. I really don’t know what’s going to happen — and it scares me.”

As we’ve talked about previously, a huge part of this season will focus on the return of Sabrina High, her past struggles with drug addiction, and her attempts to regain custody of her daughter Oakley. A frustrated Abe Schmucker can be seen at the beginning of this next clip telling Sabrina he has no patience with her because he has dealt with his brother Andrew Schmucker’s drug problems for years:

“Everything that you’ve done, I’ve seen it with my brother,” Abe says, in reference to his troubled sibling Andrew Schmucker. “It hurts me to see you go through the same thing.”

Sabrina seems surprised and frustrated. “Well why am I only finding out it’s a huge ass issue with you guys now?” she asks.

Abe tries to explain. “How do you go about to tell you that — all this, huh? In a good way? You don’t. We could see that you were hurtin’ bad, and how do you go about telling somebody something like that without hurting her even worse? Sabrina, we love you, we want to be there for you.”

After some more conversation, Sabrina just kind of loses it. “You haven’t been here!” she exclaims. “You didn’t live in your car with ten blankets piled on top of you so you wouldn’t f***ing freeze to death! you didn’t do that! I know I got myself there, but I pulled myself back out of it, and I got back on my feet. And you’re sitting there telling me like I didn’t do ****!” 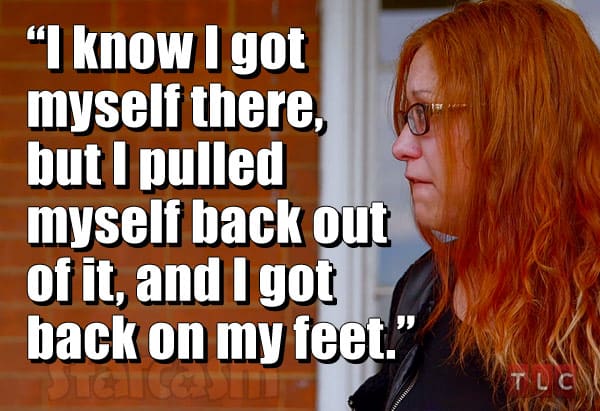 Abe calmly responds by asking: “After you went through rehab, what did you do?”

Towards the end of the clip we see Rebecca talking, but she was apparently kept away from Sabrina. “I can’t change her, I can’t change anything,” Rebecca says. “All I can do now is pray for Sabrina, pray for her to find the right way, the right path. Rather than staying in a situation that I cannot control or change, I find it better to walk away and just pray about it.”

Next up is the preview trailer for the entire season, which is jam-packed with dramatic and cuh-ray-zay scenes, including the emotional confrontation between Sabrina and Rebecca!

Here are the bullet points:

• Mama Mary Schmucker is worried about getting banished, which sounds worse than being shunned.

• Sabrina asserts her dedication to regaining custody of her daughter Oakley before then confronting Abe and Rebecca about their lack of support.

• Jeremiah Raber turns up the creepiness by asking Abe if he ever fantasizes about having sex with someone other than Rebecca before then suggesting Abe was “trying to make [Rebecca] look like Kate because she dyed her hair the same color as Kate.” Abe’s response is perfect: “Wait, what?”

• Sabrina tells Jeremiah “You’re literally the man of my dreams,” which I am assuming is some creative editing no the part of TLC and that Sabrina is talking about literal dreams that are probably not good dreams.

• Jeremiah reveals he has something to tell Sabrina. Could it be that he will be getting married soon?

• Sabrina asks Kate if it’s true that she’s dating a plastic surgeon. The clip cuts abruptly to Kate who says with exasperation, “Every single time I’m on camera I’m being asked about it! Like, I don’t want to talk about it!” [Kate went on an angry Twitter rant about TLC editing on Friday, which I assume is in reference to the scenes in the trailer. Click here for more information about that, as well as the rumor that she is dating her plastic surgeon.]

• We see Abe’s sister Esther Schmucker talking about her dreams to Rebecca, which would seem to indicate that Esther will be replacing Katie Ann and the latest Schmucker considering leaving the Amish for the “English” life.

• The very end of the trailer is the EXPLOSIVE confrontation between Sabrina and Rebecca — which looks EPIC!

After this video and the other preview clip above were released, Sabrina took to Facebook to defend herself:

People make assumptions about me and my life based off of what they see in a stupid trailer preview and it sucks. You would have been mad too if every time you had tried to talk to the person they deflected you. The one time she walked away from me multiple times every time I tried to talk to her and then instead of talking to me she stood there and PRAYED for me in front of me when all I wanted was to talk to her. You didn’t see that in the preview did you? You also didn’t see all the times I was made to feel like sh!t for being an addict. BEFORE YOU JUDGE ME WATCH THE ENTIRE SEASON. I’m sick of being treated like sh!t because cast members think they know everything there is to know about addiction. Just because Andrew and Chapel are addicts doesn’t mean that I, Sabrina, am anywhere close to being exactly like them!!!!!! I am my OWN PERSON!!! Just because they f***ed some people over now I’m the one that gets treated like sh!t because of what they did. That’s not right and I won’t stand for it. I will NEVER EVER EVER apologize for DEFENDING MYSELF!!! If you think I’m a crazy b!tch… Haha you haven’t seen crazy yet. Stop assuming sh!t about me. If you don’t like being looked down on then what in the world makes you think that I like it!?!!! I’m an addict. Deal with it. At least my sins are all out in the open for everyone to see, unlike other people we all know who like to keep theirs hidden!

UPDATE – Sabrina is lettin’ loose y’all! She not only responds to those who criticized how she looks in the preview clips, but she calls out Rebecca by claiming she gave her Percocet the first time they were in New York City!

Yeah I know I look like sh!t now that I’m clean. Sadly the drugs fried my brain (that’s what people think and so I let them, and it does change the way your brain works anyway) and the girl that used to care what she looks like finds it next to impossible to care about that stuff anymore. Idk what it is about addiction but it changes you. It’s hard to practice self care afterwards. I used to be the kind of girl that went tanning religiously as well as showered twice a day and I always had my nails done and my hair done. I try to care now but it’s hard. I hate the way I look and there is nothing that will make me feel better about the way I look. Reading nasty comments online about myself only makes me feel worse. So if you wanna write a comment about the way I look, please know that I’m already fully aware of the fact that I look like sh!t. I wonder if I’ll ever be Sabrina again. If it wasn’t for Oakley I don’t know where I’d be. Depression is hard so hard. Addiction changed me so much and I’m sorry I let everyone down.

Yeah I relapsed after rehab the first time. Relapse is a part of recovery. You f**k up and you move the f**k on. If I allowed the fact that I relapsed to dictate the rest of my life I would never have pulled myself out of that mess. F**k you too Abe.

The thing I am still mad about is the fact that I got percocet from Rebecca the first time we ever went to new York. They took it too and now they wanna act holier than thou. That’s one thing I gotta give Jeremiah he never once made me feel sh!tty for my f**k up because he knew he’s not perfect either. Nothing p!sses me off more than people that act like they would never do something like that bc they want everyone to think they are perfect. Just because I snorted mine and you swallowed yours doesn’t make a difference. You’re still taking the same thing and you’re doing it with the sole purpose of altering your mind. A drug is a drug is a drug.

I’m gonna shut my mouth before I say too much. I need to stop. I know way too much and yeah. I need to be nice even tho I don’t want to be.

Whoa!! It seems one spoiler we can expect this season is that Sabrina doesn’t completely mend the fences with Abe and Rebecca!

And speaking of what we can expect to see this season, here is what the TLC press release said:

TLC’s RETURN TO AMISH is heading back to where it all began in a new season beginning Sunday, July 10th at 9/8c. The crew visits New York City to remember the pivotal moments and ground-breaking memories they had when they first experienced the culture outside of the Amish community. From strangers to friends and now more like family, this season highlights big decisions, shocking announcements and rekindled friendships of the beloved Amish group.

On the upcoming season, Sabrina reunites with the rest of the crew after battling addiction. Clean and sober, her main goal is to regain custody of her daughter, Oakley. She convinces Mary, Jeremiah, Abe, and Rebecca to visit Kate in New York to recharge their friendships. Kate continues to pursue her dream of working in the fashion industry beyond modeling by taking classes and trying to secure a high profile internship. She’s found that making a name for herself is much more difficult than she imagined.

While in the city, Abe and Rebecca spend quality time together to try and get the spark back in their relationship. With Abe on the road the majority of the time, the first years of marriage have not been easy, but being in the city where he and Rebecca fell in love reminds them of the reasons they are together.

After being banished from the Amish church, Mary has a big decision to make about her future. The group rallies around her to support her during the transition, and Jeremiah makes an announcement about his long distance relationship that leaves everybody in shock.

CLICK HERE to watch the original Return To Amish preview trailer released last month with some additional info on the new season.

Return To Amish returns this Sunday night at 9/8c on TLC.