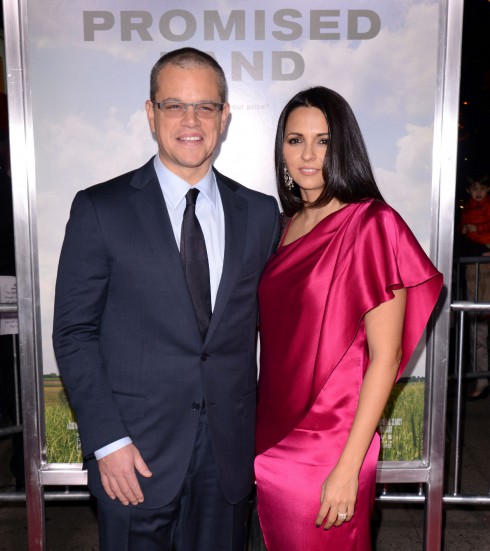 Matt Damon and his wife Luciana Barroso tied the knot in front of a justice of the peace at City Hall in New York City over seven years ago. Since then, they’ve welcomed three daughters, Isabella, Gia, and Stella. Like any woman, Luciana always dreamed of having a big wedding and despite their hectic schedules of balancing work and family, Matt intends to give her just that — and soon.

“He is renting out all 78 rooms of the Sugar Beach resort for a week in April,” an insider tells Life & Style of their upcoming vow renewal in St. Lucia. “He’s flying in guests from around the globe.” The nuptials are set to be an elaborate affair and the magazine reports that the tab for the weeklong destination wedding will be super pricey. “It’ll cost him $1 million.”

On the guest list for Matt and Luciana’s (second) big day are several celebrities including George Clooney and girlfriend Stacy Kiebler, and Ben Affleck and wife Jennifer Garner.

Matt met his Argentine-born wife in Miami where she was bartending in 2003 while he was filming Stuck On You with Greg Kinnear. Matt is the step-dad of Luciana’s oldest daughter, Alexia, from her previous marriage. After meeting, the two stayed in Miami where their first two children were born. Their third child was born in New York City were they currently reside.

Third time’s the charm: A look back at Kim Kardashian’s previous ill-fated marriages