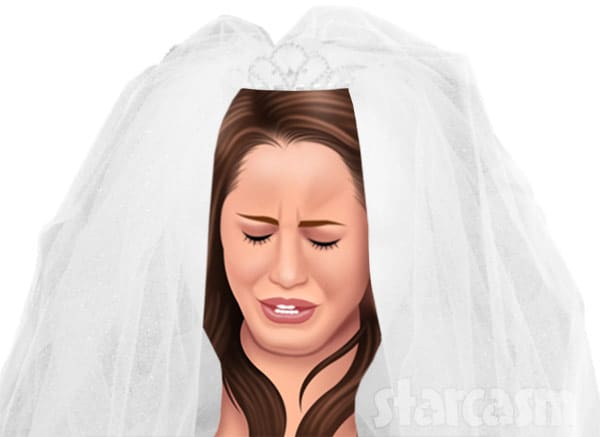 Reality television’s wedding of the year may be off! According to multiple reports, Jenelle Evans has cancelled her wedding less than 24 hours before she was supposed to walk down the aisle after a heated exchange with fiancé David Eason!

The nuptial-ending blow up happened just prior to the scheduled rehearsal dinner Friday night. According to Radar Online, Jenelle “was livid that her baby daddy worked on their home all day instead of pampering her on the first day of their wedding weekend.”

Radar has a source that was present at the time, and the site even spoke with David afterwards! The source says Jenelle screamed the following at David: “You’re not giving a f**k what I feel!” Jenelle added: “No, I’m done, you can have the ring!”

Then, in front of the gathered guests, Jenelle slammed her engagement ring down on a table set up in the backyard before expressing her frustration to a friend — who I’m guessing is Radar’s source. In her conversations with her friend, Jenelle still seemed upset about her mother Barbara, who won full custody of Jace and was not invited to the wedding, and she apparently wanted some consolation from David in the moments leading up to her special day:

I said for two hours I wanted him to care about me, talk to me about my mom situation. I don’t have a mom coming tomorrow, he has a mom. I want his attention This is my house, and he does not give a f**k. I’ve been crying all day.

Everyone is going to see the way I feel. I’m not doing this.

The source says Jenelle then drove away angrily, leaving the shocked guests (and son Kaiser) behind.

David spoke with Radar and issued this statement:

When I’m out here working constantly, every f**king minute of the day, she’s sitting around. This place looks different every day. It’s all because of me. These people wouldn’t be here if it wasn’t for me.

So far, all is quiet from Jenelle and David on social media except for Jenelle quoting Kesha by tweeting “Gotta learn to let it go.” Obviously, there has been A LOT of planning that went into the wedding, and the MTV crew is there in force to capture it all. Plus, The Ashley’s Reality Roundup reports that a “media outlet” has shelled out “a sizable amount to cover the wedding exclusively.”

We will update as soon as we know more.

UPDATE – The Ashley has a few more details about the Jeneltdown. Most everything lines up with what Radar’s sources said, but The Ashley says there was a little more to it. Her source reveals that Jenelle was frustrated in part because of how much wasn’t finished less than 24 hours before the ceremony. “The grass wasn’t down, the dance floor for inside the tent never came,” her source says.

And then there’s this extra tidbit:

One other major issue was that David allegedly sold an “exclusive” to a tabloid without Jenelle’s permission. (This is in addition to the interview he gave to Radar just now, and the deal that both Jenelle and David made with another tabloid previously.) The Ashley’s source tells her that the reporter and photographer from that tabloid showed up to get their “exclusive” and Jenelle had no idea about it and began to flip out.

The Ashley’s source says the fight was a legitimate blow up and pretty much everyone is doubtful the wedding will happen at this point. But, this is Jenelle, and if she’s anything it’s unpredictable. Speaking of which, after the fight, Jenelle posted a video on Snapchat of the kids playing in the pool at night.