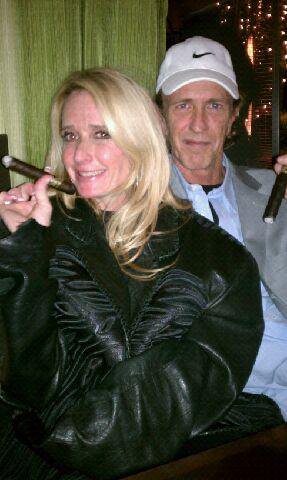 Real Housewives of Beverly Hills star Kim Richards, who was recently revealed to have had trouble with alcohol, has had her share of relationship troubles. She endured the devastating murder of her fiance John Collett in 1991, and went through a messy divorce with her second husband, oil heir Gregg Davis.

However, she’s still on excellent terms with her first husband, G. Monty Brinson, who may also still be in love with her. In fact, Monty even recently took a Vegas trip with Kim and few other friends.

Kim married Brinson, an heir to a supermarket franchise, July 1985 when she was only 20 years old. She was already pregnant at the time with their daughter Brooke, so she wanted a quickie wedding. Kim’s nieces Nicky and Paris Hilton were flower girls.

They only stayed married for two years, but they remained close even throughout her relationships with other men, including her second husband, oil heir Gregg Davis.

Monty told Star Magazine that the massive staff Kim had when she was married to Davis “just wasn’t Kim.” He also revealed that he still considers Kim his soul mate:

“I still love Kim and consider her to be my soul mate. But even if we aren’t meant to be together romantically, it’s nice to know we’ll always be the best of friends.”

Monty, who is now a professional poker player,  says he personally screens all of Kim’s dates, and isn’t confidant that she’ll ever find love or happiness again.

Interesting, if this guy is still carrying a torch for Kim, then why not settle back down with him? Of course, like all things in life, it’s probably a lot more complicated than that.

CLICK here to watch episodes of Real Housewives of Beverly Hills On Demand!