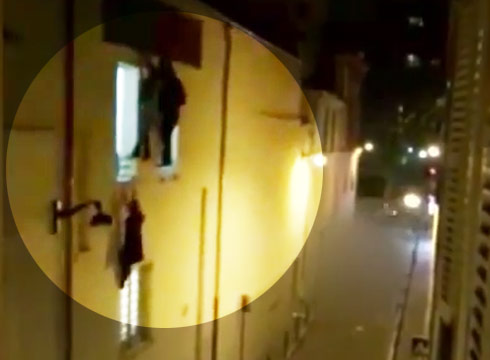 “I learned that courage was not the absence of fear, but the triumph over it. The brave man is not he who does not feel afraid, but he who conquers that fear.” ~ Nelson Mandela

The unidentified pregnant woman seen dangling from a window at the Bataclan during the horrific terrorist attacks in Paris has been reunited with her rescuer.

Video was captured of the terrifying scene as the woman held on while gunfire inside the venue and on the street below raged on. The woman begged for help while letting those who might hear her know she was pregnant. After what seemed like an eternity, a man was seen reaching out of the window and pulling her inside.

Thanks to the actions of this stranger, the woman and her unborn baby survived the living nightmare. Afterword, the woman launched a Twitter campaign to find out who her rescuer was, to see if he had survived and to thank him for his bravery.

A man, known only as Sebastian because both parties are wishing to remain anonymous at this time, responded through a friend via Twitter to let her know that he had made it out alive and was okay.

Sebastian told French newspaper La Provence of the horror from that evening. After terrorists opened fire on the crowd gathered for the Eagles of Death Metal show, he climbed over bodies looking for an emergency exit. As one of the gunmen reloaded, he jumped onto the stage and rushed away from the massacre:

“In front of me there were two windows. A woman was hanging from one them, she was pregnant and was pleading with the people below her to catch her if she jumped. Below it was chaos. I went through the other window and attached myself to a ventilation shaft. I was 15 meters (50 feet) off the ground. I held on for five minutes then the woman, who couldn’t hold on any longer, asked me to help her get back inside. So that’s what I did. I don’t know where she went following that.”

Sebastian was then taken hostage but later freed when forces stormed the building.

The pair also exchanged phone numbers after reaching each other via Twitter. The woman asked that the media not try to track her down.