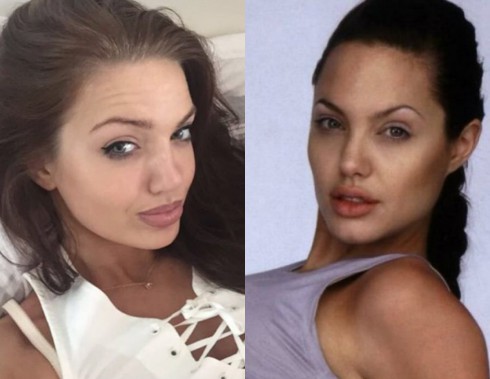 Most of the times we hear about a “celebrity lookalike” who got plastic surgery, the person doesn’t bear much of a resemblance to his or her idol. Not in the case of 24-year-old Scottish woman Chelsea Marr, who really is the spitting image of Angelina Jolie… And she apparently wasn’t even trying!

“I don’t really see the resemblance myself to be honest, I just see the imperfections in the mirror like most girls do,” Chelsea said on Facebook after some publications started to note the similarities between her and Angelina. “Despite what the articles say I am not a model I work for an oil and gas recruitment company as an Operations Manager in the city.”

Similar to many other celebrity doppelgängers, Chelsea has undergone a few cosmetic procedures — but maintains they weren’t attempts to look more like Angelina.

I have had lip fillers yes, not to look like anyone else but just because I wanted them a bit fuller just like all the other women that have also had theirs done. I had an operation on my nose a few years ago too however this wasn’t a cosmetic procedure this was because as a child I broke my nose (quite badly) and therefore had complications with it and still do unfortunately. Lastly I did have a breast augmentation yes, but again this wasn’t to try and resemble anyone, this was purely because I had absolutely nothing there before and it was something I was insecure about for years. I couldn’t even fill an A cup – even the surgeon said they were the smallest he had seen. I increased them to a B/C cup, and was just looking for enough to fill a bra and to look and feel more feminine in t-shirts and bikinis.

Chelsea may be coy about it all… But if Angelina ever needs a film stand-in, I bet she now knows who to call!

Jwoww explains why she got a second boob job, plans to have a third after next baby