I was among the first to hop on The Real Housewives of New Jersey‘s Danielle Staub bashing bandwagon, but that was all in good fun. Drug use, stripping, nasty talk in front of the kids, felony kidnapping… that’s just standard reality show star fare. But, while refreshing a few image sites anxiously waiting for pictures of the Jersey Shore cast at the Youth in Revolt movie premiere in New York (They tweeted they would be there!), the wheels fell off the bashing bandwagon and the LOLs turned into WTFs real quick when I saw a photo of Danielle Staub’s new hair and face:

I’m speechless. My snark muscles are paralyzed by a mixture of awe and revulsion. I know there are funny ways to use terms like android, Madame Tussauds and Delgo but my soul just won’t allow me to be silly about the serious unfunniness I’m looking at. What is the psychology of this phenomenon? I guess when a woman lives off of her looks and never matures beyond that reality she becomes quite dangerous if she has a lot of money at her disposal as she gets older? Sadly, that lack of maturity also prevents her from appreciating the irony of making herself so freakish in a desperate attempt to be beautiful.

Men can be a little strange sometimes too, as Malan Breton demonstrates arm in arm with Danielle at the same premiere:

Here’s a before picture from last year where it looks as though Danielle has had a little bit of work done, but still appears to be human: 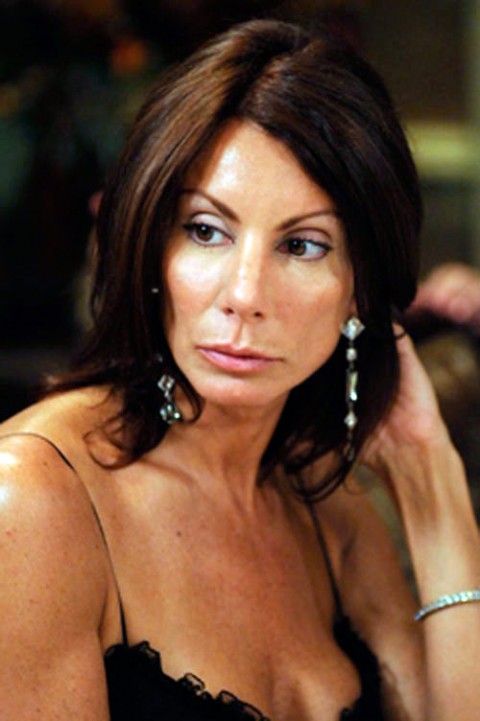 Teresa Giudice would be disappointed that I didn’t use her affectionate nickname “Prostitution Wh*re.” Sorry Teresa. This was just too serious.