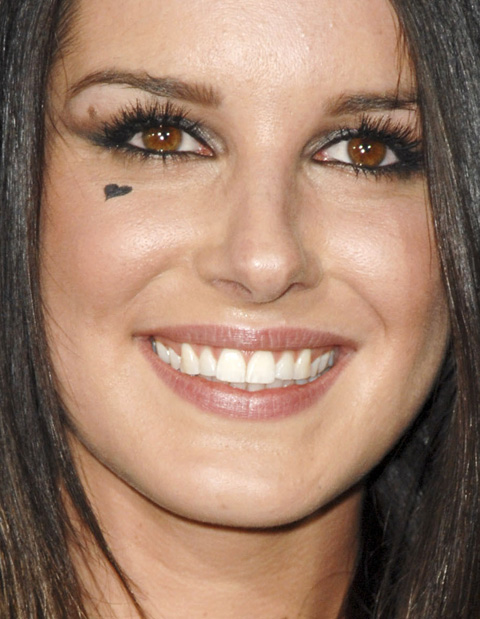 91201 starlet Shenae Grimes has been promoting Scream 4 with a little work done on her face. It’s not plastic surgery, it’s a tiny black heart tattooed below her right eye! It kind of looks like she cries valentines.

Why did she opt for this odd tat?

It turns out that it’s not about a lost love, but instead a tribute to the country of Japan because of the mass destruction and radiation problems that resulted from the massive tsunami a few weeks ago. Grimes feels close to the trauma because she was actually in the country when the tsunami struck.

She tells E! News: “I was there when disaster struck. I was in Tokyo. I couldn’t leave and as soon as I was lucky enough to get home I thought of them and I wanted to honor the people.”

It’s a nice tribute, but (thank goodness for her future self, and all her makeup artists) it’s not permanent! Shenae has simply been drawing the heart under her eye before she goes out to make a (temporary) public statement.

PHOTOS Kelly Osbourne gets a tattoo… on her head!