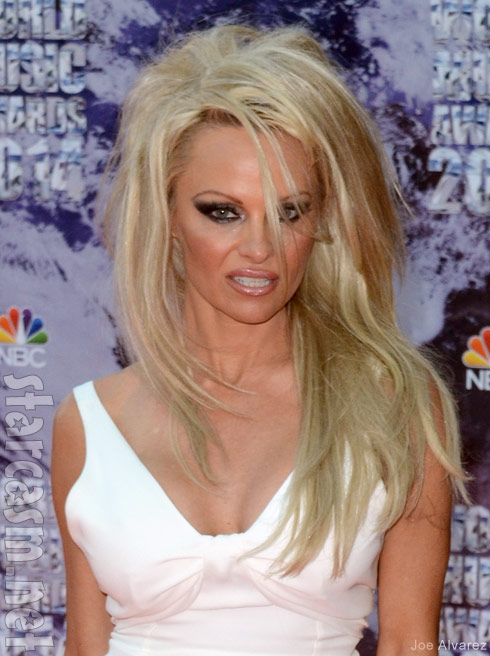 Pamela Anderson shocked the world when she trimmed off her trademark long blonde hair and went with a snug pixie cut back in October. The 46-year-old former Baywatch star has since been letting her hair grow back out, but apparently it wasn’t growing fast enough as she hit the red carpet at the World Music Awards in Monte Carlo, Monaco Tuesday with some rather lengthy (and rather wild!) blonde extensions!

Just in case you missed it, here are a couple side-by-side photos of Pamela Anderson with short hair (taken in March) and long hair from the World Music Awards.

Back in March Pamela spoke with Elle about her pixie ‘do. “At first I thought I looked like Anderson Cooper or like a Q-tip or something,” she joked at the time. “But now I feel really powerful.”

She added, “I have a friend who is an awesome, studly man, and he goes, ‘You know, some women cut their hair and it makes them look even more masculine, but you look even more feminine.’”

And never one to avoid bedroom talk, Pamela also talked about how the shorter hair impacted her love life. “I thought it would be weird having sex with short hair,” she said, “but then I kind of got into the mode.”

So which Pamela Anderson topper do you prefer, long hair or short hair?

While you ponder that, here is a full-length shot of Pamela on the red carpet Tuesday. (After all, Pamela isn’t just famous for her hair!)

Kim Kardashian goes back to brown – was her blonde hair a wig?