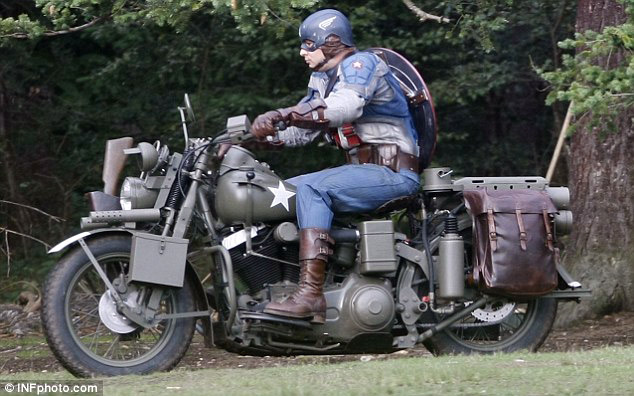 Filming has begun on Marvel’s Captain America: The First Avenger and the first photos from the set are beginning to surface! This batch of Cap snaps feature Steve Rogers in costume riding a WWII era U.S. Army Indian motorcycle riding around the countryside in England. 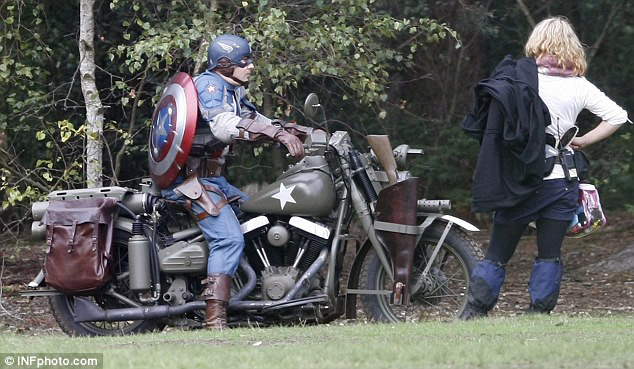 It’s unpatriotic to say this, but Captain America is looking a little more like Captain LAMErica here! I realize this is obviously a stunt man and not Chris Evans, but it’s still rather startling to see Cap being played by a chubby Zach Braff! And I assume the uniform will be CGI enhanced in the film, so it will probably look better than your average Comic-Con costume. Probably.

It’s certainly a far cry from our prediction of what to expect after it was announced Evans got the role:. (Click image to see a larger version in the original post) 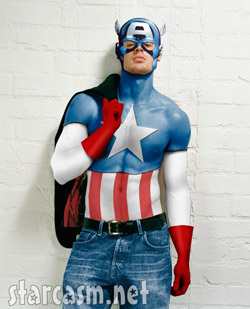 That being said, the motorcycle looks pretty darned awesome! Heck, it’s almost as cool as the custom crotch rocket Brad Pitt wrecked last year! (Did you notice the Thompson machine gun in a holster near the front wheel? Cooooool!)

Sadly, the same can’t be said for the bad guycycles. (Hydracycles?) Here’s a photo of these futuristic motorbikes from the past in which you can make out the Hydra logo and what appears to be the Red Skull emblem on the sleeves of the riders’ jackets: 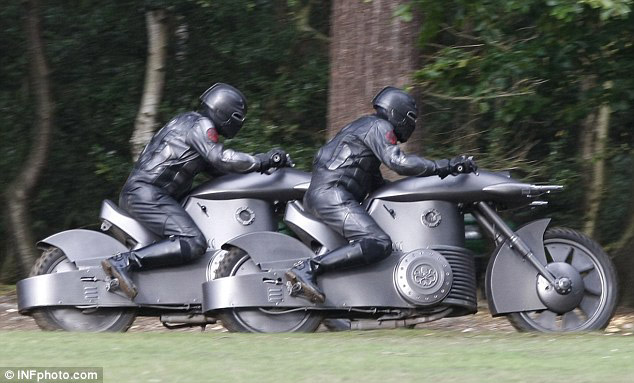 Is it just me or do those look like something from The Power Rangers? (I was going to say Doctor Who, but I didn’t want to rile up any more sci-fi comic fans than I already have.)

Apparently Captain America will be sporting a number of different outfits during the course of the film, so maybe this Wal-Mart Halloween costume is the equivalent of Spider-Man’s wrestling outfit when he was first dabbling with super-herodom. We can only hope.

We can also only hope that Cap goes through a ’70s phase with scenes like this:

Hell yeah!!! Now THAT’S what I’m talkin’ about! It’s perfectly alright to look ridiculous if you’re not trying to look cool. (I like the fact that Captain America has the true biker mentality in that he has the option of silencing his noise-polluting factory on wheels but only switches to silence when he has to!)

Captain America: The First Avenger is scheduled to be released July 22, 2011.

VIDEOS Fan rushes Nicki Minaj on stage, gets kicked and punched by security