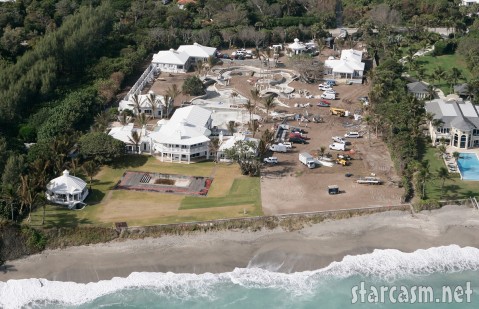 Never one to pull out any stops, Canadian diva Celine Dion is putting in a titanic home swimming pool in the backyard of her 5.7-acre beachfront property on South Florida’s exclusive Jupiter Island.

Actually, to call it a “swimming pool” doesn’t really do it justice – kinda like calling Celine just a “singer.” These aerial photographs of Celine Dion’s home still under construction reveal an enormous water park which will reportedly hold more than half a million gallons of water, feature water slides and is about the same size as two 50-meter Olympic-sized swimming pools. Celine World has been a work in progress for five years now for the 41-year-old superstar and her husband Rene Angelil. 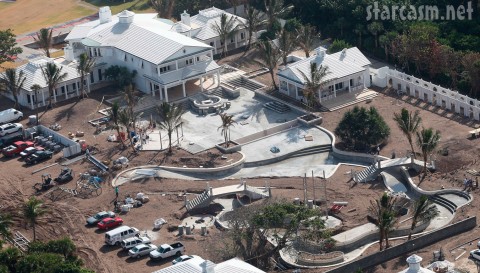 Here is some more info on Celine’s purchase of the estate:

Dion’s Canadian firm, Renlec Management, bought the property in June 2005 for $12.5 million. At the time, the land contained a two-story home, two-story guesthouse and a pool, but all the structures were leveled for Dion’s estate.

The main residence, a 9,825 square foot two-story structure, has six bedrooms, eight full bathrooms, an elevator and a basement for laundry and staff living quarters. 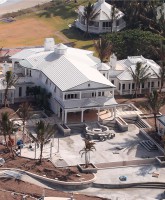 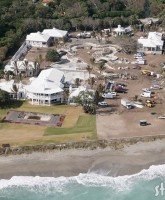 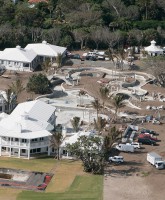 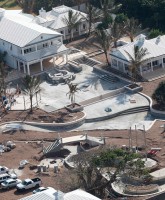 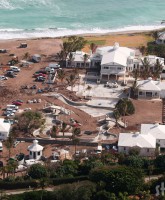 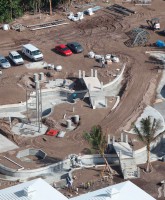 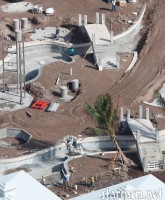 Celine Dion’s Jupiter Island home is getting a water park! 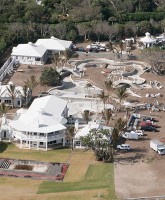 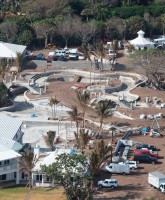 I researched the exact address of Celine Dion’s estate and came up with 215 South Beach Rd. on Jupiter Island, but there was only one site that actually had a number so I can’t verify that. It is definitely in the 200 block of South Beach Rd. though, in case you want to pack up your packs and make a day trip to Jupiter Island. I assume they let normal humans on it. But, according to Life and Style magazine you might also run into one seriously irate neighbor!

“I wish she had gone and done it somewhere other than Jupiter Island,” Joe Farish, who lives down the street from the multiplatinum selling singer, told Life & Style magazine. “Distasteful is what it looks like — the whole thing sounds like a Michael Jackson fairyland to me.”

The magazine reports that plans include “two giant pools, waterslides and a lazy river, much like an amusement park.”

“I don’t know how she got the well permits in there, because the town is usually pretty restrictive with stuff like that,” Farish said. “It demeans the whole area. I heard she has a big family, so I guess she wants to entertain all of Canada there.”

Neverland Ranch? Really?!? Something tells me that Celine’s finished estate will be a bit more elegant than that – she doesn’t seem like the tree-climbing giraffe-loving type to me. Maybe I’ll bust open my change jar and make Mr. Farish an offer. Something tells me living next door to Celine Dion would be pretty danged cool! (Except maybe the late night drunken karaoke cuz that woman has a VOICE!)

Selena Gomez vs. Celine Dion: Who wore it better?

Celine Dion: “My husband wants to die in my arms”