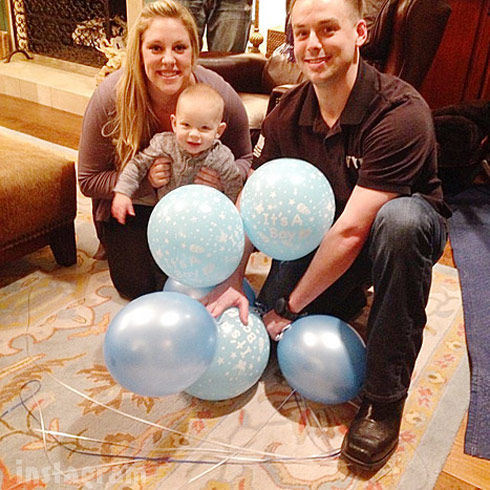 The Real Housewives of Orange County‘s Vicki Gunvalson surprised fans earlier today when she announced on instagram and Twitter that her daughter Briana Wolfsmith-Culberson and son-in-law Ryan Culberson are expecting their second child. And not only is it the couple’s second child, but it’s also their second boy! “So excited! Just found out baby #2 is a BOY!” Vicki wrote along with the photo above featuring Briana, Ryan and their son Troy with half a dozen “It’s a boy!” blue balloons. Vicki added the hashtags #troybigbrother, #bestfriends, #footballplayers.

Oddly, Vicki soon deleted the image from instagram but left her tweet up. Could it be that she spilled the beans a little too soon? I smell a plot line for Season 9!

Either way, congrats to Briana, Ryan, Troy and Grandma Vicki! (We assume potential Grandpa Brooks is no longer in the picture.)

In case you missed it, Briana previously gave birth to son Troy William Culberson on September 28, 2012. Click here for some awwwwwwww-inspiring photos of newborn lil Troy with mom, pop and grandma!