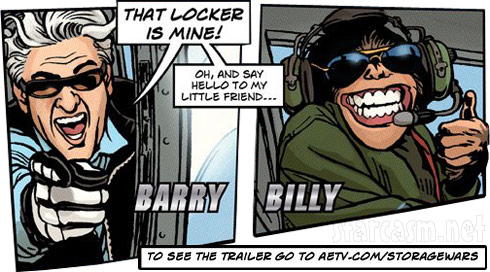 A&E decided to have a little fun while promoting the current season of their popular reality series Storage Wars, filming a high-budget Hollywood blockbuster style trailer featuring the stars of the show as action/adventure heroes with the clever play-on-words tagline, “Summer Lockbuster: This summer 5 soldiers of fortune battle it out for… stuff!”

But apparently the over-the-top promotion didn’t end with the trailer, there was also a comic book! Well, not a an actual, full-sized comic book, but a two-page spread featuring Jarrod Schulz, Brandi Passante, Darrell Sheets, Dave Hester, auctioneers Dan and Laura Dotson, Barry Weiss, and Barry’s lil fren, Billy the chimpanzee in all their Marvelous glory. 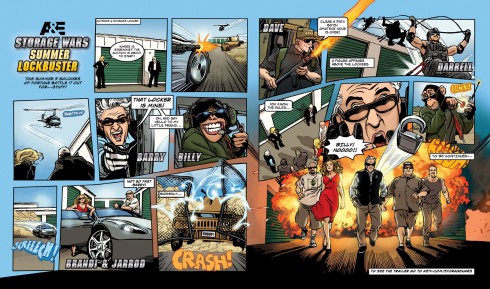 The spread basically illustrates the trailer and finishes with the same iconic exploding backdrop scene.

UPDATE – Auctioneer extraordinaire Dan Dotson tweeted us this next photo of his lovely wife Laura Dotson holding a limited edition, signed print of the comic book spread along with the comment, “A&E gave the cast a signed version totally cool” 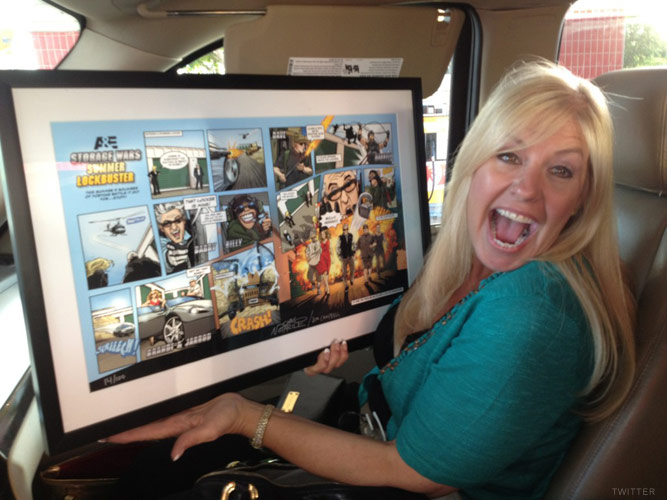 Although it’s hard to compete with Joker Barry Weiss and Billy, I’m a dyed-in-the-wool Passantite (in other words, a dude), so my favorite part would have to be Brandi strutting her stuff at the end. Of course, the animation could never compare to the real thing…