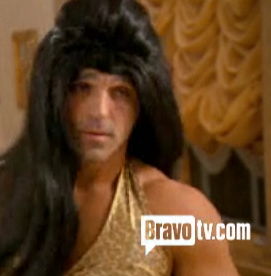 Even though the Teresa Gorga Giudice  and brother Joe are engaged in a bone-crushing fight-to-the-death in the media at at various social events in New Jersey, there is one bright spot in all of this: Joe Gorga dressing up like Snooki from Jersey Shore. He dons the costume for a Halloween adult’s night out with his fun-loving wife Melissa. As she says, “We’re young, and we’re fun, and we party. That’s me and Joe.”

AlthoughMelissa says isn’t turned on by Joey’s poof and Snooki-approved dress, but I think secretly she is. Let’s face it, secretly we all are.

Maybe Melissa’s just not impressed because as she says, he kind of does look like his sister, or maybe it’s that he proclaims himself a hotter woman than his wife. Jealous much? ; )

VIDEO The Black Swan and Showgirls trailer mash up

Jennifer Lawrence: ‘I do love my Real Housewives’