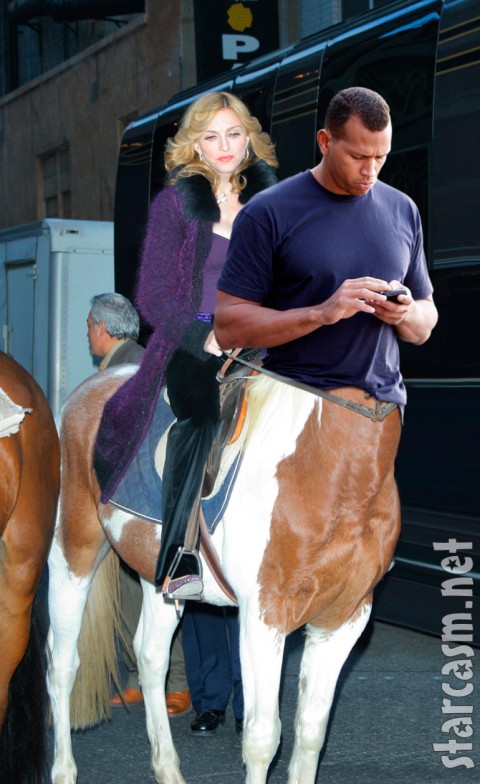 It’s not just egotistical portraits over his bed, Alex Rodriguez actually IS a centaur! Starcasm.net investigators have uncovered this rare photo of the New York Yankees third baseman in his equine form! The photo seems to be from earlier this year when A-Rod was still dating Madonna.

1. Alex Rodriguez is a magical creature
2. Madonna used to ride him pretty hard
3. A-Rod always has to be the centaur of attention

It also dispels the rumor that A-Rod is an ass.

Don’t know what the A-Rod/centaur controversy is all about? Us Magazine printed a story back on October 30 claiming a former fling of Alex’s had told them he had two portraits of himself painted as a centaur hanging above his bed. Here’s an excerpt from the Us Magazine article:

A former Rodriguez fling remembers seeing portraits of the slugger, 34, as a centaur hanging over his bed.

“He was so vain,” his ex tells Us Weekly. “He had not one, but two painted portraits of himself as a centaur. You know, the half man, half horse figure?”

Adds the ex, “It was ridiculous.”

I will be the first to predict that the fourth installment of the Twilight Saga series of movies will feature the centuries-old battle between vampires and centaurs and the villainous equine couple will be played by Alex Rodriguez and the filly-faced Sarah Jessica Parker. You heard it here first!