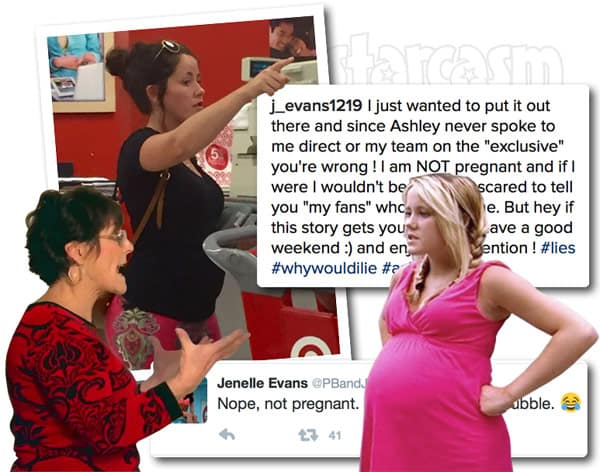 A reliable source is reporting that Teen Mom 2 star Jenelle Evans is currently pregnant — confirming a rumor that has been circulating since photos of the reality star at the Season 7 Reunion taping in Los Angeles last month seemed to show her midsection was a bit larger than usual.

The report comes from The Ashley’s Reality Roundup, who has a glowing track record when it comes to accurately reporting breaking Teen Mom stories. The Ashley adds that she is not aware just how far along Jenelle is, but “she can confirm that the show’s producers are not happy about it.”

The Ashley’s story comes on the same day that someone posted a photo of Jenelle shopping with David Eason and her son Kaiser at Target in which many are saying she is obviously sporting a baby bump:

Just after the Reunion taping, Jenelle responded to the pregnancy rumors as well as rumors that she and David Eason were engaged: “For everyone asking.. No I’m not pregnant and no not engaged,” she posted on Facebook on May 3. “Happy where I am in life and comfortable so I’ve been eating a lot more lol.” Perhaps that trend has continued?

After The Ashley posted her story, Jenelle has been all over social media adamantly denying that she is pregnant: 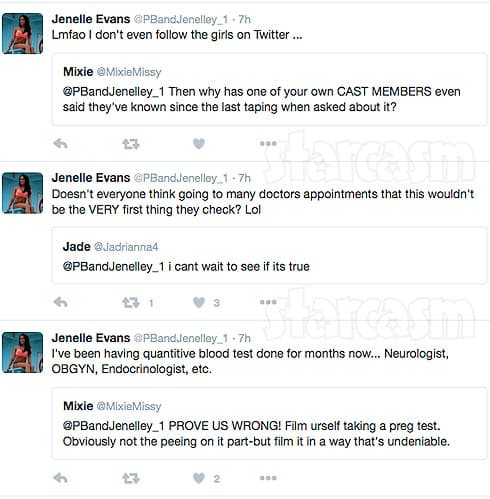 Jenelle shared a screen cap of the article on Instagram and penned this response:

I just wanted to put it out there and since Ashley never spoke to me direct or my team on the “exclusive” you’re wrong ! I am NOT pregnant and if I were I wouldn’t be afraid or scared to tell you “my fans” who support me. But hey if this story gets you attention have a good weekend 🙂 and enjoy the attention ! #lies #whywouldilie #ashleyslying

Also, Jenelle’s PR Twitter account, which she has acknowledged is legit in the past, shared this denial:

Jenelle Evans is 100% not pregnant.

On a side note, The Ashley points out in her article that the Teen Mom “baby bonus” payout to parents for a new pregnancy is a myth. “The Ashley can tell you this is totally false. It’s been floating around for years, and all of The Ashley’s sources have told her that it’s simply not true.” Even if that is the case, it is undeniably true that numerous tabloids and/or websites will pay money for exclusive pregnancy announcements, birth announcements, pregnancy photos, first baby photos, etc. Of course, Jenelle and the other mothers of Teen Mom 2 and Teen Mom OG are making A LOT of money (reportedly upwards of $300,000 per season now), so $5,000-$10,000 isn’t that big of an incentive any longer.

I should also mention that Teen Mom 2 fans continue to point out that Jenelle similarly denied her pregnancy with Kaiser, which, of course, later turned out to be true.