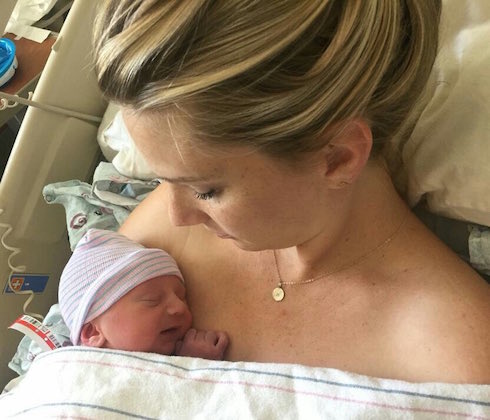 Dad Taylor announced the arrival of baby Owen by tweeting the photo above and including the little guy’s name as well as his measurements – 7 pounds, 3 ounces, 20 inches long. “An incredible experience with this incredible woman!” he added.

Heather also shared the photo on Instagram and captioned it with:

Owen Bartlett Hubbell 7 lbs 3oz born 2.11.16…I can’t tell you how amazing an experience to go from a cesarean and having a VBAC…but I did it with the loving help of my husband, Dr and family 🙂 and of course this little guy ??

Taylor later updated fans to let them know Heather had made it home safely:

Happy Valentines Day to all! Mama and baby home safe and sound! TY for all the wonderful wishes! A new chapter begins! #thegrowinghubbells

Heather and Taylor, who were high school sweethearts, first became parents in September 2013. The two got engaged in August 2014 and finally tied the knot last summer.

While Heather may have her hands full in her new mother-of-two role, Glee fans can rest assured that the actress will be making a return to the TV (and silver) screen in 2016. She is slated to appear in LA LA Living, a TV series currently in post-production, as well as Folk Hero & Funny Guy, an indie film starring Alex Karpovsky from HBO’s Girls. At this time, a premiere date has not been set for either project.