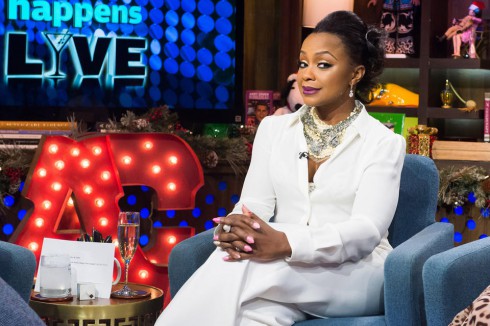 Real Housewives of Atlanta‘s Phaedra Parks and the imprisoned Apollo Nida may be in the midst of a divorce, but the parents of two still talk nearly every day.

“[We talk] five, six times a week — if not more,” Phaedra said on Watch What Happens Live.

She added sons Ayden, 4, and Dylan, 19 months, are also in communication with Apollo, who was sentenced to eight years in prison for fraud schemes.

“Well, of course we have a 1-year-old, so he doesn’t really comprehend,” Phaedra said. “He’s just too young… Ayden definitely knows that he’s in Kentucky and Apollo told him where he was. He definitely is very aware. It’s very tough for a 4-year-old.”

Although Phaedra and Apollo’s relationship seemed less than friendly before he entered prison, she said they are now amicably working on their divorce — or, as she put it, “We’re resolving this marriage… resolving to dissolve.”