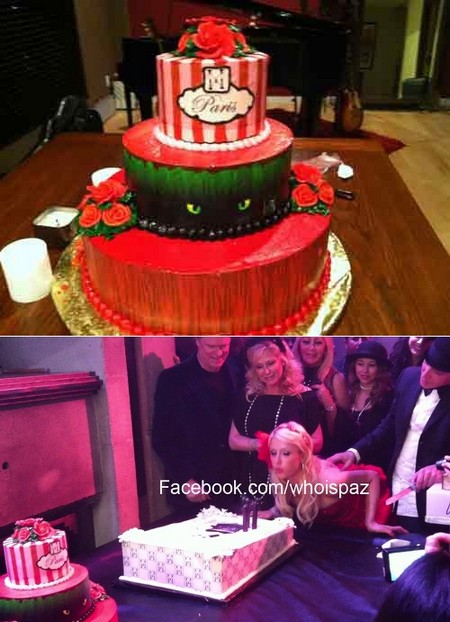 Before now my favorite Paz was the trainwreck wannabe-nudist chick from Boardwalk Empire, now it’s the drunk “L.A. musician” who stole Paris Hilton’s $3200 birthday cake and then shamelessly bragged about it on Facebook.

This takes balls and all, but dude stole a $3200 cake. Lindsay Lohan is currently steeping in a pot of extra spicy legal stew over a similarly priced necklace.

Paris probably didn’t cry any tears over the cake heist though, she had another, bigger one, and Paris’ people at the party told Paz that they were probably gonna throw out the one he ended up stealing.

Paris was probably also distracted by the $375,000 car her boyfriend bought her.
Here’s part of his story:

Even in my sub-functional state, I realize this is going to be a delicate mission. There are still at least 100 people in the building, 20% of whom are employed to be looking for idiots like me.

Parading a confection the size of a small firetruck through the main hall is going to turn a head or two.

I make for the front door as Kev makes for the valet. I summon some gumption and begin to walk purposefully back into the party.

I brush shoulders with the guy who resembles the head of security.

“Yes, sir,” he acknowledges with a slight bow toward the rear of the house.

I take my cue and make a bullet for cake city.

In one fluid motion, I sidestep a confused waiter, seize the prize, and about face to the door.

I pass the security chief again on the way out.

I nod purposefully… he nods in return.

40 seconds later I’m in the front seat of a Nissan Maxima with 70 lbs. of awesome in my lap.

As the sun rises, I crash hard. In the morning, I’ll awake to an interesting surprise in the den.

It’s red. It’s delicious. And I don’t know WTF I’m going to do with it.

It turns out that the $3200 cake was prepared by Hansen’s bakery with a Moulin Rouge theme and was spiked with Lucid Absinthe! Too bad Paris didn’t get to try that!

Hansen’s released this statement about the event:

It is very unfortunate that someone stole the cake from Paris’ birthday party. We had the cake designed especially for her with Lucid in the batter and a beautiful representation of Lucid’s artwork on it, which she requested to meet the Moulin Rouge theme of her party. We only wish that guests could have tried her delicious cake.”

Via: Allie is Wired