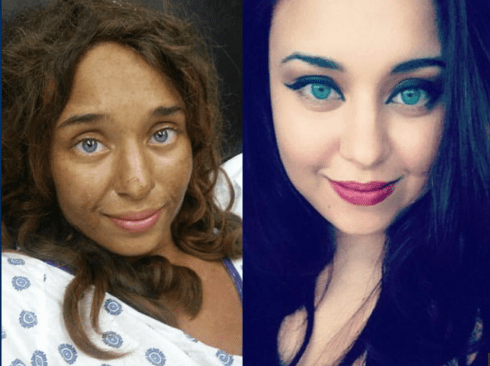 This past Saturday, 25-year-old Lisa Theris was found desperately thin and covered in scratches and leaves on the side of the road in rural Alabama. She said she survived on eating berries and mushrooms and drinking water from puddles and streams–while lost in a dense forest for almost a month. Now, police are piecing together exactly happened to the young woman, as there seems to be a link between her July disappearance and a burglary involving suspects Manley Davis and Randall Oswald.

Davis and Oswald says Theris was riding with them to rob a hunting camp, but she was unaware of the pair’s intention. When she found out what they were up to, she reportedly jumped out of the car, and they hadn’t seen her since. The two men went on to steal $40,000 of property, including four-wheelers, ATVS, and chainsaws. They were arrested two weeks later.

Police questioned Theris about her disappearance, but she was in such a weak state they’re giving her a bit more time to recover. “We’re giving her some time to let her body adjust back to normal,” said Chief Anthony Williams of the Bullock County Sheriff’s Department. “And maybe she could give us some insight and fill in the blank spaces.

“When I asked about what she ate, she had broke down and started crying, but she said the main thing that kept her alive was her family,” Williams continued. “Her mother and her father, she said. That really gave her the will to live. She survived thinking about them.”