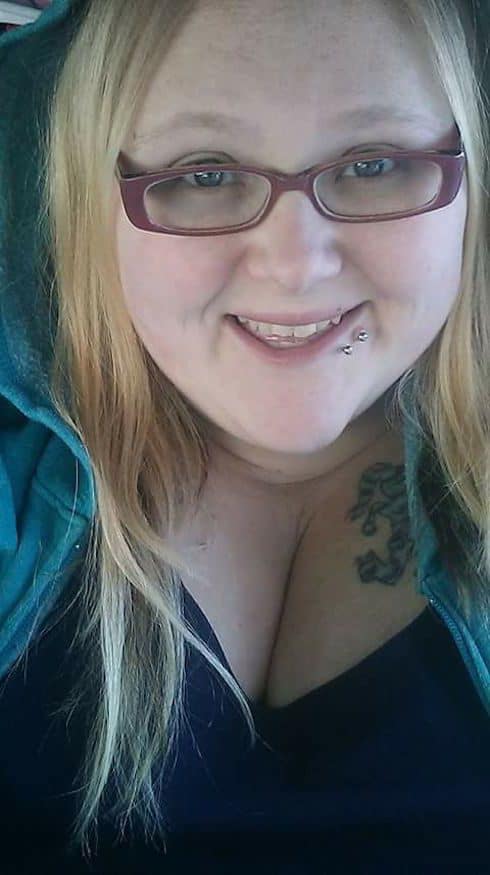 TLC viewers who’ve been hoping for an episode on My 600 Lb Life Nicole Lewis today are in for a treat! Nicole herself just confirmed that production of her Where Are They Now? episode is ongoing — and she offered more good news in the form of brand new before and after pics!

We were able to originally confirm Nicole’s follow-up episode of My 600 Lb Life back in June, when the Season 5 participant also shared what were then the latest photos of her inspiring weight loss. At the time, open fan speculation — some of which appeared to come from friends of Nicole’s — suggested that she had lost “over 200 pounds.” Considering that she began her weight loss journey at over 700 pounds, that number would put Nicole somewhere below the 500-pound threshold.

Thanks to a series of My 600 Lb Life Nicole Lewis today updates since then, though, we know that it looks like Nicole’s current weight loss is a far higher figure. For example, the photo at the top of the article is the most recent that Nicole has shared; it went public on Valentine’s Day, and shows a far slimmer face than the one viewers saw when Nicole’s episode aired last year.

Nicole paid particular attention to her face in one particularly enthusiastic update from last autumn. The October before-and-after pics Nicole shared emphasized the dramatic change in her appearance since her surgery — and managed to capture her buoyant spirit! (We’ve quoted Nicole’s caption beneath the photo, in case it’s too small for you to read.) 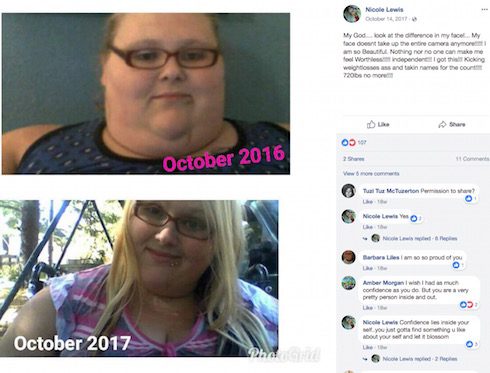 My God…. look at the difference in my face!… My face doesnt take up the entire camera anymore!!!!! I am so Beautiful. Nothing nor no one can make me feel Worthless!!!!! independent!!! I got this!!! Kicking weightlosses a$$ and takin names for the count!!!! 720lbs no more!!!!

But the milestones didn’t stop there. A month later, Nicole took to her public Facebook page to gush over the fact that she’d just been able to go to the movies and, for the first time in ages, sit in a theater seat. “I went to a movie theater on Saturday and watched A bad moms christmas,” Nicole said, “with no wheelchair to be comfy in… I sat right in a theater seat with the arms lifted on it!!!!”

Nicole added that she also went to Subway and, just for good measure, managed to sit in a booth.

In more recent updates, Nicole captioned the photo at the top of the article in part by saying that she’s “never felt soo empowered my entire life!!!!!!” (This is one of the few times when a social media post featuring six exclamation points in a row seems justified!)

And Nicole offered a few more tidbits in recent interactions with fans. Though she can’t say much thanks to My 600 Lb Life‘s legendary secrecy, Nicole said she could reveal that she’s still a patient of Dr. Now’s: “Cant release [details] cuz im filming but i can say im his patient….[He] gave me a tool to save my life soo i owe him so much.”

Speaking of filming, Nicole’s Where Are They Now? episode remains in production: “No idea when my follow up will air.. Have alot personally going on right now.. Plus filming..sooo bleh super busy. ..got alot to film and got alot of things coming up i gotta focus on. Xoxo. Thanks for ur support.”

However, in a different Q&A the same week, Nicole told another fan that her follow-up episode “will air close to summer time.” Given that the current season of My 600 Lb Life is the longest in the show’s history, and that the latest Where Are They Now? episodes are airing concurrently, it seems possible that we’ll get an official look at Nicole Lewis today within the next couple of months.

Ongoing congratulations to Nicole, who looks better than we’ve ever seen her — and seems to be feeling better than she ever has in her life! We’ll close with this adorable, life-affirming message Nicole shared on her son Jayden’s 4th birthday. Given the complications with Nicole’s C-section and the fact that her birthday is just three days after Jayden’s, Nicole will always have an extra reason to be grateful in the first week of the New Year:

You can follow Nicole Lewis on Facebook here. The My 600 Lb Life Nicole Lewis episode is available for streaming here.