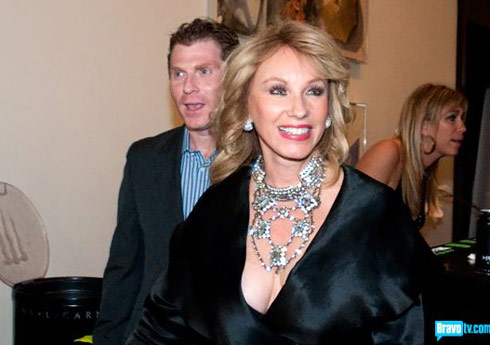 If you missed our comprehensive earlier post Lea Black of The Real Housewives of Miami turned up the mama-drama by calling into Watch What Happens Live last night and accusing fellow Housewife cast member Cristy Rice of acting like a $1,000 hooker among other scandalous things.

This all stemmed from her annual charity event, The Black’s Gala, which was featured prominently in the 2nd episode.  Rice showed up at this elite Miami social affair after having gone through dealing with a flat tire and as Lea puts it “crashed” the party without a ticket or RSVP.  Here is the video of the explosive phone call in question, please pay close attention to the absolute stunned faces on host Andy Cohen as well as Housewives Marysol Patton and Cristy Rice!

The morning after, Lea fielded questions via an online chat hosted by HollywoodLife.  Lea was asked a variety of questions including her thoughts on Charlie Sheen’s public face-melting melt down but I’m going to single out the Q & A’s in regards to “hookergate.”

So did a good night’s rest calm down Lea’s ire?  Let’s find out!

Q: It looks like you put a lot of time and effort into the gala, did it hurt your feelings that Cristy tried to crash it? And why do you think she didn’t want to give money to such a good cause?

Lea: I assumed that Christy, in good faith, would make a sizable donation and apologize for not RSVPing that night…but rather, she went around trashing the charity and calling me a bitch and telling people we should have paid her to show up! At the time, I didn’t want the party/gala to become anything except “for the kids” and that the people that had paid — had a good time and get their monies worth!

Q: Lea, how hard was it to film with Cristy after she crashed and for the remainder of the season — is this rift a plot line we are going to continually see?

Lea: I didn’t take Christy crashing the party personally…it could have ended up being all in good fun, had she just done the right thing immediately following the event by sending in her payment. for three people. I gave her the benefit of the doubt, but when it became clear she had no intentions of paying, I sent her an invoice certified mail.

Lindsay, the uncomfortable part was that because it took a month for her to finally pay — and I’m still convinced the only reason she ever paid was that we were filming and she knew she would be exposed. So, the uncomfortable part for me is spending my time with people that feel they don’t have any responsibility to do the right thing, especially for kids in need.

Q: The whole point of a charity event is to raise money. I can’t believe that Christy would just crash it. I think you handled it really well.

Lea: Jasmine, you’re right – it’s a fundraiser…and the difficult thing for me to understand how someone could possibly justify spending thousands of dollars on cloths to show up at an event — but do not want to donate money that can literally save a kids life and freedom.

Q: Do you think you’ll ever forgive Christy?

Lea: Keren – this is not about forgiveness. It’s about doing the right thing and telling the truth.

It looks like Lea can hold a grudge and hold it tight!  I’m curious as to your opinion in regards to this whole “hookergate.”  I think most of us can agree that Lea had the right to be upset about Cristy’s appearance without paying but do you believe she should still be harboring such staunch resentment about the affair or should she have let this one go by now?

You can read all of Lea’s interesting answers about topics other than her Cristy bashing via HollyWood life here.