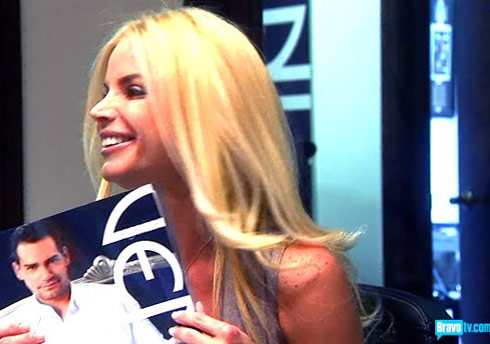 On the heels of your usual Housewives type of drama involving Lea Black comparing fellow cast member Cristy Rice to that of a $1,000 hooker another Housewife, Alexia Echevarria, is under fire for her insults aimed at the town of Hialeah, FL aired during the second episode of The Real Housewives of Miami.  It’s one thing to expect a little cat fighting between the ladies but now we have an entire town looking for blood!

The comment in question came as viewers were introduced to Alexia’s professional side as executive editor of the Spanish publication magazine Venue.  She’s discussing upcoming issues with her step-son Herman Junior when she says the following in regards to Hialeah:

“We distribute here in the city of Hialeah, which social-economic is not up there.  You see it’s not like Miami Beach.  It’s not like Coral Gables.  Our magazines there sell because the lower person wants to see you and they want to wear the dress you’re wearing.  They want to look like you.  They want to be at that event and they can’t so the closest thing they have is this magazine.”

Yeah, I could see how folks from Hialeah might be just a wee bit offended by that remark.  Well actually it was much more than a wee bit because Hialeahans are downright ticked off!  Readers of The Miami New Times chimed in on Echevarria’s comments.  Here are a few of their responses:

Alexia’s husband is from Hialeah, and owes a lot to the City of HIaleah. He ran the Hialeah Chamber of Commerce for years, was a City councilman and ran for Mayor. According to the Miami Herlad Alexia gave birth to one of her sons in Palmetto hosiptal in Hialeah. Her bleach blonde hair must have affected her memory — Lilyluv

I have two words for Alexia: PEDRO. ROSELLO. Didn’t she birth her ‘male model’ son “Pete” in Palmetto? Ay mija, don’t play yourself! I’m from Hialeah, very proud of this and for one will tell you that I am ten times a more cultured individual than Alexia – I am educated and refined and have more tact in my pinky than she does in her entire body.

Being the editor of a magazine that still hopes to do business in Hialeah Alexia has come out with an apology via her Bravo Housewives blog that she encouraged her Twitter followers to read.

First of all I would like to thank you for watching the show and for all of your love and support.

I need to bring into context the comment regarding the people of Hialeah, FL. When I made that comment, I was answering the question if Venue magazine was only a magazine for the upscale people of Miami. My answer was no. Our magazine is for everyone. I explained the fact that Venue caters to everyone regardless of who you are, where you are from, and what your socioeconomic level is.

I admire and respect the people of Hialeah; in fact my husband is from Hialeah. We love the city and are very proud of it. Venue is honored to have such a great following in Hialeah. I apologize if this hurt or offended anyone’s feelings. That was not my intention.

I will give Alexia some credit for addressing the issue and also state that I believe some of what she said was lost in translation due to her broken English.  With that said, I can’t imagine this statement will do enough to put her or Venue back in good favor with the folks of Hialeah, FL.