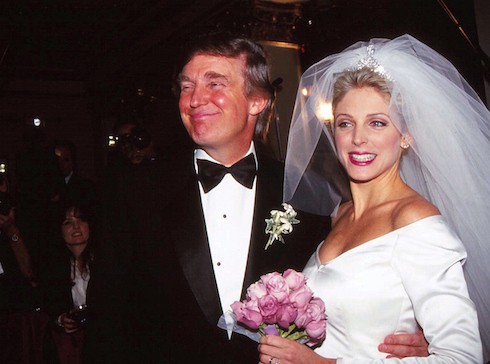 Part of Donald Trump’s taxes were leaked to the New York Times over the weekend, and the political fallout from the revelations they produced is ongoing. The leak also produced one major question: Who was the leaker? Currently, gossip centers on none other than Marla Maples, Trump’s ex-wife and the woman with whom he cheated on his first wife, Ivanka, beginning in 1989.

First off, a quick ICYMI: on Saturday, the Times produced the first of what’s sure to be many October Surprises this election year when they published a story alleging that Donald Trump might not have paid any income tax at all for an 18-year period beginning around 1995. According to their analysis of three pages of Trump’s 1995 tax return, the then-mogul’s declaration of a $916 million loss would have enabled him to take advantage of loopholes available only to real estate developers and use the loss to cancel out up to $50 million in taxes per year until what would essentially become a tax credit was used up. Since $50 million goes into $916 million 18 times, it’s therefore possible that Trump paid no tax from about 1995 to about 2013.

But the story gets juicier: Times based its analysis on three pages of Trump’s 1995 taxes, which the paper said it received anonymously, in an envelope with a Trump Tower return address. No one has yet stepped forward to take credit for the leak–possibly because sharing tax information without permission is punishable by a $5,000 fine and up to five years in jail. However, it’s since emerged that Marla Maples, the second of Donald Trump’s three wives, may have been the one to send the envelope.

How to account for this? To begin with, as New York Magazine pointed out, there’s an arrow on the first page of the document, pointing to Marla Maples’ signature.

Signature Tab Pointing At Marla's Signature, Times Never Called Her For Comment, Among Other Clues https://t.co/2JbnLcrbYY

In addition, it’s long been speculated that Maples bears some resentment toward Trump for apparently showing little to no interest in raising Tiffany, he and Marla’s daughter. As we reported last year in our profile of Tiffany, she was raised almost entirely by Marla, on the West Coast, while the rest of Trump’s children were immersed in the family business back east.

There was also this curious Twitter exchange yesterday, which some are apparently interpreting as Marla’s passive way of taking shots at her former husband’s misfortune:

#FallLove Breathe it in as if 2day's the first day of your life. The kabbalist's say 2nite Adam&Eve were created. S… https://t.co/8OClFyMDw9

@MarcACaputo @itsmarlamaples wow. How do u know abt those stuff?

There’s also one more, especially tantalizing bit of information to consider. Because Maples was married to Trump in 1995, his taxes are also her taxes: she is exempt from penalty for sharing them.

RELATED ARTICLE: Who is Tiffany Trump? Donald’s 21-year-old daughter steps into the spotlight