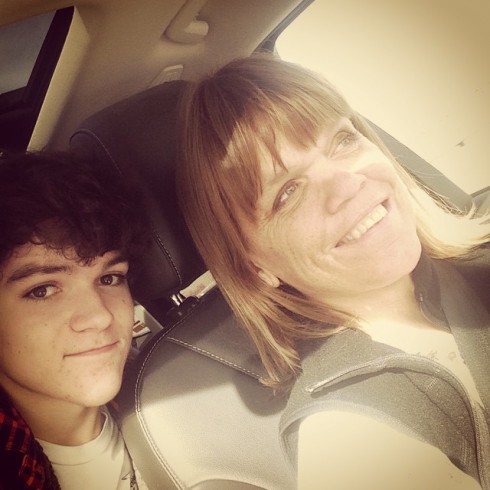 Little People, Big World star Jacob Roloff recently made waves when he tweeted about getting “f**ked out of money” he had earned filming his family’s reality show. However, the tweet was not the 18 year old’s first time openly expressing his true feelings about growing up on television. In an August 2 Instagram post, Jacob posed with seven-year-old Jack Hamill from The Little Family for a nice photo, but in the lengthy caption, he expressed his unhappy memories about the experience for Jack’s benefit.

This is Jack. I've never felt I had more of an opportunity to influence someone's life than when I told him how much I didn't like filming when I was his age, so he knows just because the adults say it's what's best, doesn't mean it's what's best. Then after, I asked him how he felt about it and after a pause he said, "I like it medium", meaning not at all, which is exactly what I would've said at 7. Seeing him for the few days that I did and hanging out with him for the short time that I did was a crazy reflective experience, seeing what it looked like (more or less) to be a 7 year old thrown into different situations for your parents' ratings. He doesn't know that yet though. He's more of a central focus character in his family's show than I ever was, too, so there's more 'depending' on him; I can't imagine. Im hoping I get to see him again and how he turns out, and that what I said sticks with him.

After the post there was an interesting conversation between Jacob and his followers in the comments section:

COMMENTER 1: While I entirely support your right to express your feelings and opinions on your own experience, I don’t think it’s fair to say that this little boy doesn’t like being filmed or imply that his parents are exploiting him. As a mother, I can tell you that it would severely anger me if someone implied such a thing about me. I think it’s great that you and he had a good time together but you’ve crossed a line to say that what he’s going through is the same as your experience.

JACOB: So he knows filming will alter his whole life? I was 6 or 7 when filming started and he’s 7 now and I’m not sure how long before now they’ve been filming, but those situations seem pretty similar, no? Both boys, both 7, both being filmed, both VISIBLY not liking it. I’m not saying they’re identical, primarily because I don’t have dwarfism and he’s the oldest child, not the youngest, so he’s actually got MORE focus and pressure on him. I think I trust my opinion on this more than anyone else’s.

COMMENTER 1: My point (that you seem to have missed) is that you implied that his parents are putting him on TV for their own satisfaction…”ratings” is what you used which I assume means money, fame, etc. You don’t know the reasons they chose to do the show. If it is, in fact, for money, you don’t know what kind of circumstances they’ve been in that led them to choosing this.

JACOB: What do you mean? It IS money, maybe not maliciously, which I never meant to imply, but people don’t go on TV for free. It is so they and their kids can have ‘good’ lives, full of fun trips and easy ‘work’; but what I’m saying is money and fame and trips and a ‘good life’ are being traded for authenticity, genuine family time, and shaping the life of a young kid and, more often than not, in a bad way. IM saying, childhood stardom needs to be thought out waaaay more, and there needs to be some sort of system in place to protect the minors from being screwed over by whatever TV network, or their parents, out of money they are entitled to for appearing on TV.

COMMENTER 2: Sounds like you’re putting words in this kids mouth. If he says he likes it medium that doesn’t mean not at all. Just because you’re not happy doesn’t mean he won’t be happy.

JACOB: I saw the way he was even when the cameras were on him, not in private, and I can’t believe more people don’t see it. The producer just asks him to do things and say things, and provokes other people to ask him things, but he knows the questions are fake so his answers were usually short or nonexistent. I could see his disinterest in the show within 10 minutes. And then when it was just us he asked me when I started filming and if I liked it, and after i made it extremely known I didn’t like it at all, I asked him if he did, and he shook his head and I asked why and he changed his answer and said I like it medium, maybe thinking I would tell someone, but with certain inflections in his voice that gave me every reason to suspect what I’ve said. I know it’s probably an unpleasant truth for everyone involved, but that kid will likely not end up loving the show or the people making him do it.

COMMENTER 2: and that’s okay. I personally think children should be given a choice if they are at a reasonable age. If the parents are making the decisions they should consider the child’s wishes and not let producers manipulate their children. However, he could grow up unscarred and have fond memories of the experience. Only time will tell.

But perhaps the most interesting comment was from Jacob’s mother, Amy Roloff, who used Jacob’s post to make a public apology to her son. “You’re an awesome son Jacob,” says Amy. “You, like your brothers and sister keep blessing me everyday. I’m sorry it was so tough on you.”

Jacob hasn’t replied to his mother as of yet — at least, not on Instagram. The Roloffs are going through such a tough time right now with Matt and Amy’s divorce, and poor Jacob has got to be feeling the hurt from that too. The Roloffs always prioritize communicating with each other on the show, and hopefully Amy doing so here and extending the olive branch to Jacob will help mend fences.

Jacob Roloff says he was ‘f**ked out of money’ from Little People, Big World