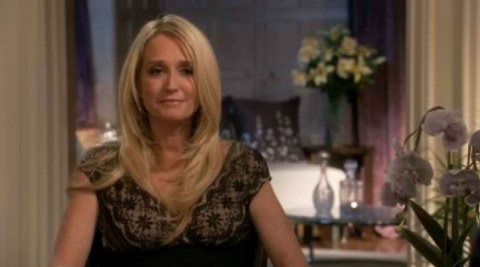 Kim Richards’ downward spiral of addiction played out for fans to see during Real Housewives of Beverly Hills season 2. Although she was also battling her addiction during season 1, it had gotten much worse. Kim’s erratic behaviors became extremely worrisome and her co-stars, including sister Kyle Richards, didn’t know how to deal with her. She was out of control. Luckily, Kim entered rehab in December to get sober.

“I’m an alcoholic,” Kim told Andy Cohen during the Real Housewives of Beverly Hills season 2 reunion special. “I have so much guilt and shame for my behavior and what I did. And then I drank to cover the guilt and shame.”

After completing a 30-day rehab program, Kim is back and better than ever. Plus, she’s dumped her live-in boyfriend, Ken Blumenfeld. As you may remember, Kim had begun dating Ken during season 2. The guy that Kim’s co-star, Brandi Glanville, infamously called a ‘gay bull mastiff’ had a shady past, and family and friends worried that he was having a bad influence on her, so perhaps it’s a good thing she kicked him to the curb!

Real Housewives of Beverly Hills season 3 is currently filming and during a recent trip to Vegas, Kim was noticeably absent from the group. Why? A show insider reveals, “Kim’s sobriety is still pretty new. Vegas wouldn’t have been the best idea for her.” Kim had previously told Huffington Post, “I’m not going to be sitting around with these girls sipping cocktails and just hanging out.”

After getting sober, Kim knew it would be hard to be part of a reality show, but wants to set an example for people still dealing with addiction. “If I can do it [get clean], under THESE circumstances—having it all filmed, having everyone know every little detail about everything—then you can do it. It CAN be done,” she tells fans.

Kim’s plan for sobriety during filming? “I’m going to be very into AA and spending time with the people who have been supporting me.”

RHOBH: ‘Frequency Medicine, Q360 Club’ What does Denise Richards’ husband Aaron Phypers do for a living?