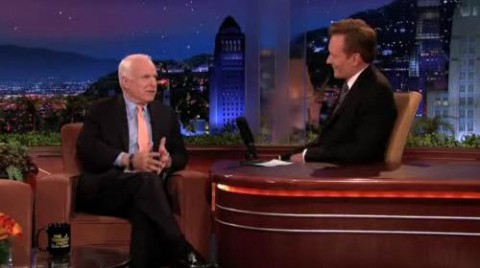 John McCain acted a little wacko about a year ago in desperation for votes, but I’ve always liked the man when he was being himself. He’s a cool cat with a logical mind, a sense of honor and truthfulness, and, probably the best trait for a politician to have (or anyone to have): a sense of humor. He kills on Saturday Night Live (more so than the actual cast members), and he’s awesome in interviews. I don’t always agree with him, but a lot of time I actually do. When I don’t agree with him, I definitely respect him. He probably would be a pleasure to go out for coffee with, and although I didn’t vote for him, I think he would have made a good president.

Anyhoo, he sat down last night with Conan O’Brien last night on The Tonight Show and had a great convo. You can watch it below, but here are some highlights:

John McCain gets Twitter: “I think it’s an incredible means of communicating that will, I think, change the world over time, for the better.”

About Ted Kennedy: “He was larger than life . . . He was a happy warrior.”

About Town Hall meetings: “They should be respectful . . . What’s the point of just yelling at each other?”

About health care reform: “We can agree if we work together.”

About Sarah Palin’s resignation: “I was shocked because she didn’t call me ahead of time.”

Watch more of what he has to say. Conan asks some great questions: