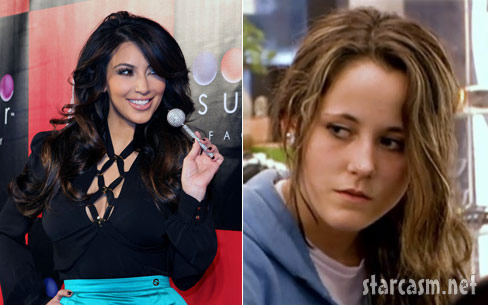 In perhaps my favorite accidental pop culture celebrity war of words Teen Mom Jenelle Evans has fired another missile at the badonkulous bow of Kim Kardashian.

If you’re not familiar with the history of this battle it all began with Kim K finding it necessary to blog about teen pregnancy and her opinion that the show Teen Mom glamorizes the proposition of becoming a young mother.  A portion of her Preggersburg Address (which you can read in full here) stated that:

It seems that shows like Teen Mom are all of a sudden making teen pregnancy seem cool in the eyes of young girls. The kids from these shows are all over the news, even on the covers of magazines, and have been become almost like celebrities, but girls, these are not people you should idolize!

Well someone else who knows a thing or two about staying in the celebrity press cycle, Teen Mom Amber Portwood, had a little something to say about what Kim had to say.  Gary Shirley’s good gal stated in part (full version here) that:

Last time I checked, Kim Kardashian had a sex tape floating around on the internet and I’m pretty sure she made a lot of money off of it.  She made a sex tape when she was younger and she wants to bash the girls on Teen Mom?

Following up on Amber’s comment Teen Mom 2 cast member Jenelle Evans dropped what just might very well be my favorite celebrity quote, not counting anything Charlie Sheen or Mel Gibson has ever said, in regards to Kim Kardashian’s advice:

Ha!  Yes, poop does happen and after a long reprieve in this war Jenelle took to her Twitter account over the weekend to comment on what she felt was a different kind of happening sh!t, Kim Kardashian’s new song!  Here is what Evans tweeted to her peeps:

Is Jenelle the most candid reality TV cast member ever or what!?!  If you haven’t had the opportunity to hear Kim’s song “Jam (Turn It Up)!” you can listen to it here.  I know Kim is busy taking New York but I wonder if she’ll have time to defend her singing turf?