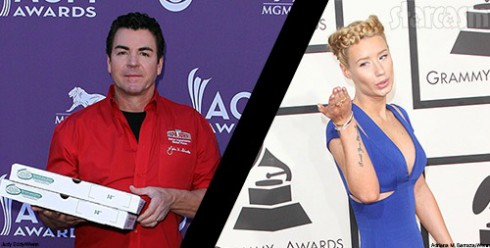 Although Iggy Azalea didn’t win any of her four potential Grammy awards, the feud she got into this weekend didn’t have anything to do with her competitors. Rather, the Australian rapper engaged in some angry back-and-forth with Papa John’s Pizza.

The strange episode began on Sunday when Iggy tweeted at the pizza chain that she was angry “the drivers they use give out your personal phone number to their family members.” She later posted a screenshot that showed someone claiming to be the brother of her delivery guy was texting her.

@PapaJohns I ordered a cheese pizza but instead I got tons of calls and messages like this one. pic.twitter.com/fgKhydivXb

She said she asked the supervisor to send her pictures of the employees so she could “identify who it is that steals your information,” but the supervisor said they couldn’t do that “to protect their privacy.” Iggy noted that was a ridiculous excuse, saying, “Too bad they don’t value the privacy of their customers also.”

The company responded a while later by trying to crack a joke and diffuse the situation — but Iggy wasn’t having it.

@PapaJohns I don't think data breach is funny. I expect you to contact me to explain how you are going to rectify your breach

Iggy ended her rant by threatening to file a lawsuit if the breach isn’t taken care of in a “satisfactory and professional way.” Until then, it looks like she’ll be giving her business to DiGornio Pizza.

Considering how devastating last year was for celebrities in terms of security breaches, Iggy’s frustration seems very justified — and the public responses from Papa John’s don’t help. What do you think?