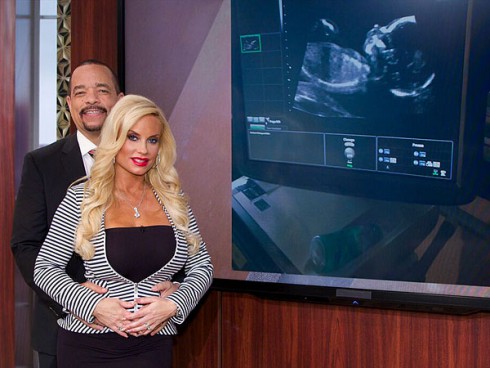 More big news for Ice-T and Coco Austin: Just one week after revealing they are expecting their first child together, the pair announced it will be a baby girl…named Chanel!

In the premiere episode of their daytime talk show, Ice & Coco, the long-married couple said that baby Chanel is due in December. That means Coco is more than five months along, although it’s hard to tell from her figure. (The audience also seemed to have trouble guessing!)

Coco explained she is still trying to wrap her mind around the pregnancy.

“You never think it could really happen to you—that you can actually make a human being—and when you do, you’re like, ‘Wow!’” she told People. “Your body takes over and does it itself. You’re not putting the hands and feet together–your body’s cooking it and it’s amazing. It’s a miracle how life can happen.

Despite some pre-existing issues with her blood pressure, everything seems to be going well with the pregnancy, and Coco is now in the “healthy zone.” Her current cravings also work in her favor–turns out, the mother-to-be can’t get enough honeydew melon, blueberries, and pineapple.

Coco caught in another club photo scandal with Mustafa Abdi, Ice T yet to react

VIDEO Coco Austin gets a butt facial with Bethenny Frankel