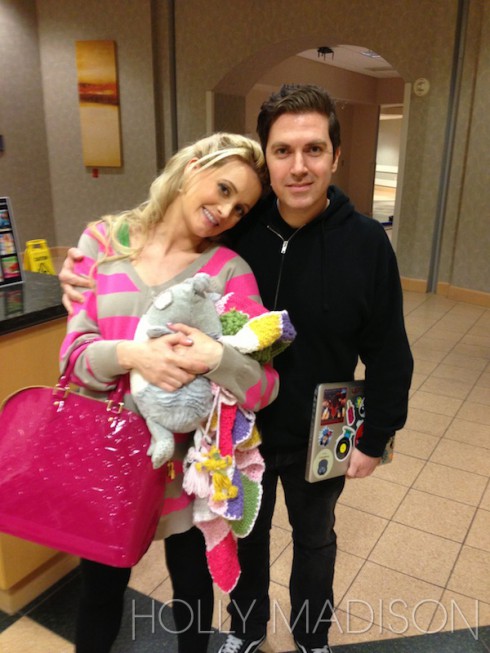 Former Playboy model Holly Madison gave birth to her first daughter on Tuesday, and although she and boyfriend Pasquale Rotella were very forthcoming with some of the details of the birth, they refrained from revealing her little girl’s name. “We have her name picked out,” Holly said, “but that has to remain a secret for now . . . It’s such an unusual and difficult name I have a feeling we’ll add something simpler once she’s arrived safely in our world.” Well, ow the cat is out of the bag! I’m not certain if she chose something simpler than what she had in mind originally or not, but Holly’s daughter’s name is certainly unusual! And colorful!

And the name Holly Madison gave her daughter is…

“I wanted to give my daughter a unique name,” the former Girls Next Door star tells E!. “Growing up, there was a girl in my school named Rainbow and I was so envious of that name. I thought it was so pretty and unique!”

Holly also wrote on her blog:

“I couldn’t be more blessed to have such a perfect daughter and have never been happier than I am now!” the reality star wrote on her blog shortly after Rainbow’s birth. There are a lot of smug haters out there who bag on my choice of a name, but I don’t care about what they think. I want my daughter to be proud of who she is and learn to speak up and stand up for herself at a young age.

I spent most of my life being a people-pleaser who worried about what other people thought or thought was cool. And I don’t want that for her.”

Although it was impossible for most of us to know at the time, Holly actually gave everyone a hint of what her daughter’s name would be way back on February 12 when she tweeted this photo of a Rainbow Brite Colour Buggy Buggy along with the hashtag #need:

I am guessing little Rainbow is going to absolutely love her name! Now, whether little Rainbow is still fond of her prismatic moniker once she becomes big Rainbow is a completely different question. Of course, she will have the Aurora fallback, which is sort of a more mature colorful natural phenomenon.

Holly took to her website today and shared the photo above as well as this appreciative message to her fans:

Hi everyone! I just wanted to say thank you for all the wonderful messages you guys have been posting! I appreciate them all!

I’ve been spending the last day or so learning how to be a mom— it’s the best project in the world! I never thought I would be so happy-especially on so little sleep!

So what do you think of Holly’s choice? I only hope she’s able to complete the Lesley Goregeous trifecta with two more daughters named Sunshine and Lollipops…